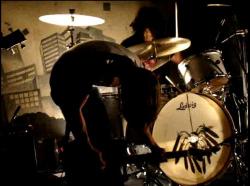 First, let me start with the basics: Without even the slightest slice of hyperbole, Dead Confederate is now my current favorite band. They had already bowled me over with their debut EP, the best thing that I have heard this year. Now, they've hit me with the best live show I've seen in a long while. Check out a video interview, some live performances, and upcoming tour dates down below!

The details: I am a crotchety old music snob. Only a fraction of what I hear does anything but painfully scrape at my eardrums. I spend most days complaining about what the kids are listening to nowadays and recalling a time in my youth when music was fresh rather than a purely and predictably derivative, watered-down facsimile of long-forgotten greatness. Most of the recent bands that I really enjoy listening to generate excitement by presenting fresh songs through the adopted lenses of their primary influences. You might even hear me comment at a party, for example, that I love Bruce Springsteen's latest record by The Arcade Fire.

Every once in a long, long, long while, a band comes along that not only causes me to perk up my ears, but to reopen my faith and to retract my claim that there is no uncovered ground left in rock music. All the chords have been revealed, all the notes have been sung, so what could be left to show us?

While it is true that Dead Confederate proudly paint their influences on a collective canvas, that canvas is smeared with a contradictory hyper-realist urban landscape cut by streaks of abstract expressionism scattered across the sky. One reacts with doubt, followed by curiosity, and finally with awe. The idea is simple, but the execution is brilliant. The simplicity, rawness, and the power of the composition brings it to life. Gnashing, clawing monsters break loose to prey upon our ears; ears whose defenses have been dilapidated by years of complacency and uniformity. Dead Confederate is much, much more than the sum of its parts.

Vocalist Hardy Morris viscerally recalls the charm and power of Kurt Cobain, both visually and sonically. Walker Howle's intensely subdued, perfectly toned guitar textures are pulled from the yet-to-be-conceived Dark Side of the Goo (a record of Pink Floyd covers performed by Sonic Youth). John Watkins' keyboards add the cutting urgency that smashes any tiny bit of lingering desire to shout requests for "Heart-Shaped Box." Jason Scarboro's near-metal drumming is chest-poundingly intense, but surgically precise, creating an almost impossible balance of certain consistency and teetering, brakeless spinning. The band is held together by the solid thump of cool, straight-man and frequent-songwriter Brantley Senn's bass. Senn's penning of "The Rat," perhaps my favorite song of 2008, and apparently a significant catalyst in the chemical reactions of the band, also deserves specific mention.

In addition to a tremendous rendition of "The Rat," Dead Confederate put on an almost overwhelmingly compelling performance from start to finish, filling a 40-minute set with three songs from their self-titled EP and four songs from their full length debut, due in September. The backlit stage provided a deliciously creepy backdrop for the eerie journey through the dark and slow to the fast and heavy. The songs were emotionally perfect as the entire band lurched through melodic constructions that boiled with tension until they exploded into precisely spastic, climactic crescendos.

Although it was easy to scribble a list of influences observable in the songs, it was impossible to come up with a single critical match exemplifying what any single song sounded like. The band was clearly not only confident playing off one another, but more uniquely, each member was free to contribute in his own personally fulfilling way. The brilliance of the band is something abstract, but simplistic. The fellows of Dead Confederate have extremely distinctive individual personalities, individual appearances, and individual tastes. The band, however, has an uncanny collective consciousness that makes for some of the most powerful, tight, and original music that I have heard in a long time. I see tremendous success in their future. Do not miss your chance to see them before their full-length is released and every music fan on the planet is camping out to get front-row seats to their arena shows.

The band was kind enough to take the time to do a video interview after the show: