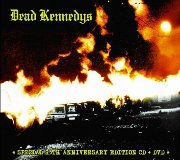 Manifesto Records has reissued the Dead Kennedys' genre-spawning, ultimate rock and punk debut, twenty-five years after its initial release, re-mastered with assistance by guitarist extraordinaire East Bay Ray (who had put together the band) and featuring a wonderful extra-disc hour length documentary about the early days of the band forming and the recording of the record.

Interviewing Olivier of the French faux-nova band Nouvelle Vague recently, which had gotten acclaim for their wickedly sensual and clever femme-vocal reworking of the DK's legendary "Too Drunk To Fuck" ("Now you bawl like the baby in 'Eraserhead'"), we both found how much we admired the first wave American hardcore band for two reasons: They reminded us of the underrated Stranglers, in that they used interesting musical arrangements built around the bass players' ominous tones, and the satirical and innovative way both bands portrayed violence and conflict in society. Bass and blood, basically.

The bass player for the Dead Kennedys is a guy named Jeff, who renamed himself Klaus Flouride, in joking response to Johnny Rotten's lousy dental hygiene. Flouride grew up loving Buddy Holly, and tried his talents on guitar first. Later on, he found himself wanting to be the new Jack Bruce, the bassist for Cream, and attempted such a role in the late 60s playing for Billy Squier (!) in a group called Magic Terry and The Universe. "Three of the five people in the band were playing in Welsley, MA, and then Magic Terry went to NYC, and got into the Warhol scene."

Klaus himself had loved the Velvet Underground, attracted to John Cale's use of droning bass viola — perhaps you can hear a little of that in the primal, hypnotizing riffs of "Kill the Poor" and especially "Holiday in Cambodia" on Fresh Fruit. "He's pretentious," Flouride says of Cale, "but he's allowed. I also love his really raw stuff, "Paris 1919" and "Fear Is A Man's Best Friend"."

When Flouride first came from Boston to San Francisco as a temp employee for bank of America (!!), he and his corporate pals used to go down to the Mabuhay Gardens and make fun of the punks that would hang out and perform. But soon, he realized that his deep love for rock and roll was based on trying new things and being extreme, and these were the types of people capable of doing that. "Those are my favorite bassists too — Hector Penalosa of the Zeros, Will Shatter of Flipper, but also (Motown and jazz musician) Jimmy Wilkins."

Flouride struggled a bit with the new music though. "I got a copy of the Ramones first album, and actually took it back to the store," he says. "But the songs kept going through my head."

So he got his bass and equipment out of hock and started dreaming again about participating in rock and roll. Flouride's bass-lines are simple but enchanting, making the Dead Kennedys' music as alluring as it can be apocalyptic. "When Ray and I first met, I didn't want to sound like the Ramones or the Sex Pistols. The first thing we played was 'Peggy Sue.'" Both Ray and Klaus were interested in the roots and oldies involved with the form, and the things they prized the most about what they tried to do "was to use melody and humor, weirdness, in what we wrote and performed." This can be heard throughout the debut, Jello Biafra's satirical wit and flamboyant performance of which is matched by the comic twists and dramatic turns of the bassist's and guitarist's playing.

"We found ourselves overlooked by mainstream journalists, and even magazines like the NY Rocker ignored us, calling us the Ventures of punk rock," Flouride says. "We weren't trying to be purposefully nerdy like Devo, but nobody tried to sound like us either. There are no Dead Kennedys' clones. We had a signature sound, and we still do. It's very conscious, setting chords against chords, to get all of these counter-melodies."

On their recent tour with new vocalist Jeff Penalty (Vaz Hoil, Stupid Ferrets), someone in the crew played Flouride the Nouvelle Vague version of "Too Drunk To Fuck." "I thought it was hysterical," he says, "Perfect, with that lounge feel." Whether Olivier and his partners in NV know it or not, the Dead Kennedys had experimented with lounge-punk themselves on their classic second version of "California Uber Alles" (which one wishes was on this debut, instead of the rather dated anti-hippy original version, but then that would be re-writing history, wouldn't it?).

Flouride is still working hard with his band, but keeping his life flexible so he can raise his daughter. "I don't want to be a nine-to-fiver, I want to watch her grow up. I also do production; I just produced a band out of Arizona called Brazen Beat, recording them in my basement, and then I take them to a nearby studio called Wally's Sound for sequencing and mastering. They have really nice low rates, and they're right in the neighborhood."

With his relaxed, focused-on-music lifestyle, Flouride was able to give some time to helping in preparing the re-release of Fresh Fruit, making sure that it "was something that I'd want in my own collection, like adding the DVD, with the cameras filming the people involved in the interviews for two or three hours each."

Like the best punk rock, the songs on the album are shrapnel-pieces from life exploding around the artists at the time. "'Let's Lynch the Landlord' was about a condemned building we lived in, on the top floor, the ceiling dropping in, the drain system was a pipe that went out the window," Flouride says. "It got really backed up and even the fire department didn't want to go up there to clear it, it was so dangerous. But these were really unsanitary conditions and the landlady was totally uncaring. I wanted to go up on the ladder to knock off the pipe, and the landlady ended up yelling at the firemen when we opened the drain up, blaming them for causing her damage."

The Dead Kennedys' got their promotional break when Vancouver BC's The Pointed Sticks came through San Francisco and took the band along with them to Los Angeles on tour. "This was during a time when bands made an album to make an album, not to make money. Bands that make albums to make money don't last that long. You can tell from watching it on stage, which is which."

Flouride isn't surprised though that punk rock eventually became the Sound of the Corporate State by the time the 90s came around. "It was expectable, anything that hangs around long enough, eventually gets co-opted and someone makes money on it. It took awhile. But remember, all the original punk bands were on major labels. I have no problem with that, if that's what they want to do. I have no problem with Green Day at all. Punk rock wasn't just about intimacy or being in a small place, it was about reaching as many people as you can. Like with anything, ten percent of what's being done is original, and the rest just follow. But Picasso wasn't any less valuable when his work was on a larger scale."

This doesn't mean that Flouride and his band don't still take a stand, or do things subversively. "We had to blow off a fun show at the Olympic Auditorium in Los Angeles, featuring reunited members of Flipper, the Germs, Suicidal Tendencies, and others, because they brought in Coors Light as a sponsor. We pulled out of that. Dealing with Coors' p
olitics through the 80s, we couldn't handle that. And with the X-Games, we still performed, but when they told us 'No dirty words' we had the audience sing the response to 'Nazi Punks ("Fuck Off!").'"

The Dead Kennedys' music stands the test of time due to its ability to address societal concerns that never go away. As our streets fill up with detox turn-outs and crack-heads and jail overflows of today, the band was initially inspired by Reagan turning mentally ill people out of state-supported hospitals due to budget cuts in California. "Most of the politics in our songs were concerned with social issues, not specifically political problems: 'The Man With The Dogs,' 'Ill In The Head,' 'Kill The Poor.' Trying to get inside what makes someone like Donald Rumsfield's head works."

This ability to transcend topical rhetoric allowed the band to become well distributed overseas, where their existential messages could be as well received as their innovative take on punk music itself — something bands like Black Flag had a problem with. "We weren't just a bunch of American guys talking about how tough it was to be living in America," Flouride says. "We were talking about global politics, and personal social issues."

I ask Flouride how he feels about the album twenty-five years later, and he says that he feels it stands up. "It's not the best we sounded in the studio, but then we didn't know about recording then. It's a bit mid-rangey and high-endy, but the songs — there is no filler on the album. It's thirty-eight minutes long, and some that weren't finished or not ready were simply left off." (For example, the excellent "Gaslight," which appeared on the incredible captured-in-concert Live at the Deaf Club in 2003.)

As someone who finds himself drawn back to the creativity of first wave punk in spite of the meathead, near meaningless hardcore it inspired for decades after, Fresh Fruit for Rotting Vegetables transcends nostalgia, its human truths and genuine anger and just completely fun-to-play music irresistible to any smart, tasteful listener. The album sounds better, and more necessary, than ever.