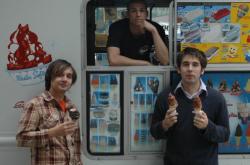 Deptartment of Eagles at Neumo's

Department of Eagles is not a band I should like. They trawl through a genre best called “schmindie” and after seeing High Fidelity, I’ve got a built-in aversion to “sad bastard music” – yet there is just something arresting about Department of Eagles’ frontman Daniel Rossen’s voice.

Rossen also does time in the popular indie band Grizzly Bear. While Department of Eagles is largely considered his “side project”, DoE has a longer longevity than Grizzly Bear does – and the songs are generally more personal than Grizzly Bear’s are. DoE is Rossen’s partnership with guitarist Fred Nicolaus and the project has taken off considerably since the release of their solid 2008 album In Ear Park.

Playing their first Seattle show at Neumo’s Wednesday night, the show was sold out and packed – almost uncomfortably so. My friends and I got inside at least half an hour before the opening band, Cave Singers, took the stage – but still had trouble finding a good spot to see the show. The line to get into the club was long and perpetual. There were a lot of people clamoring to get in, wishing they had bought tickets earlier. I doubt it was way over capacity (a problem that the club has had in the past) but it could have been close. I also read in Pitchfork the next day that members of Fleet Foxes were at the show. Really.

For the show, Rossen and Nicolaus had a bassist and drummer in tow to fill out their sound, so they had a more organic and natural sound live and did away with most of the electronic flourishes that fill out their recorded output.

Still, though, with Department of Eagles, there wasn’t anything approaching a real melody we heard that night and the evening was driven by Rossen’s harmonies. He has a chilling and pure voice that can be hypnotic at times. They played mostly songs from In Ear Park – and held the large audience captive and captivated. Rossen began with a solo, acoustic version of “Balmy Night” – playing with just his banjo before being joined by the rest of the band. It was a lovely moment listening to him play with a packed club nearly silent. The highlight, though, for me was when the band played “Around the Bay”, with the light instrumentation to complement Rossen’s harmonies and lyrics.

It was a little jarring that Rossen needed to tune his guitar or banjo at every break between songs (or so it felt). It’s one thing to be a perfectionist but I doubt more than a handful of people would have noticed his guitar was out of tune and all would have preferred that the time saved would have been used to playing another song. Still, when they were on, they sounded terrific. It wasn’t a perfect set – they played for roughly an hour, which is about what you’d expect.

The final song of the set (before the encore) was sung by Nicolaus and my online scouring could only find “Untitled” as a title. He had a nice, soft voice but it wasn’t as chilling Rossen’s but effective and made a nice comparison. The encore consisted of one song, Rossen playing a new song called “You’ll Never Know” – and it was pretty remarkable to watch. Rossen recorded himself singing the backing tracks (“oooo oooo oooh”) and looped it back while he sang and played guitar over it. Nicolaus came out with him and said that this was the final show of the tour and he wanted to get the chance to watch him in awe play that song, just like everybody else.