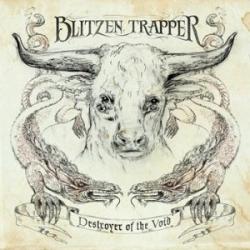 Destroyer of the Void

For their fifth full length for a band that has been around since 2000, Blitzen Trapper come on like a mighty gust of minty fresh barf. When I listen to Destroyer of the Void I am trainspotting back to the bedroom I shared with my brothers with scattered piles of gatefold LPs surrounding me, Roger Dean covers gleaming beneath the overhead, LA cowboy band member-photographed inner sleeves toss about, studying the thick lengths of tracks on vinyl containing arcane mixtures of big beat dinosaur stomp, keyboard sheen and swirl, folk-pop snappiness, misty roads into musical necropolis. These records are the cities of the dead now, buried by three chord punk and music videos and busted-bass mix tapes, and once piled up ubiquitously in record stores across the land to await some form of damnation have probably all ended up in Blitzen Trapper’s Portland. There they and Colin Meloy and other fearlessly nostalgic musician dudes have probably emptied out the long platter bins to swipe riffs, bang the bong and blast the beer to, and reincarnate them in songs like the opening title track to Destroyer of the Void, which sounds nearly Wagnerian by way of Wings.

Eric Earley is the long-time chief of this tribe, and on last year’s equally schizoid-diverse Sub Pop debut Furr he delivered songs less ambitious but no less diverse and digressive, the peak being Nietzschean bubblegum pop “God And Suicide.” This time for me it’s the presence of Tom Petty-styled fall from grace young girl blues “Evening Star” and the Celtic raise a church to burn it “Heaven and Earth.” They are the poles of flesh and spirit that keep the lengthy, suite-like sequence from getting too (pick your prog poison) “Dragon’s Song” or not enough Neil Young lover’s lament (“Laughing Lover,” “Lover Leave Me Drowning”). Earley and his five main collaborators may be trying to cram too much legacy into their albums, but as their chops become as top as their inspirations are broad, it never fails to entertain while his poetic lyrics enlighten.

Crafted in Mike Coykendall’s attic studio in between art projects like a play based on Mystery Science Theatre 3000 number one mock-fest Manos: Hands of Fate (if the bio materials are to be believed), the musician/engineer makes it all sound LARP viking morning in White Pass crisp, taking Destroyer in the Void as seriously as his work with Bright Eyes or M Ward. Strings arranged by Heather Woods Broderick (“Efterklang”) sound bathyklopian, while she and Alela Diane add astrobleme backing vocals to “The Tree.”

Furr and its excited tying burning coals Blackbeard-style into the soft beard of Pac NW rock may have brought Blitzen Trapper the attention of Rolling Stone and late night television, but it’s the convincing self-mythology in their sound on Destroyer that will place them as a new trace memory in kids discovering their records two or three decades from now.