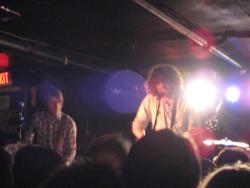 Destroyer at The Middle East

The days leading up to seeing Destroyer at the Middle East in Cambridge, MA went something like this:

Me: I'm going to see Destroyer next week
You: Cool! Is that a heavy metal band?
Me: No, it's this band with Dan Bay-jar… Bay-har? I'm not really sure how to pronounce his name.
You: Oh… who's that?
Me: He's one of the people in the New Pornographers
You: Oh, sweet! I like Neko Case!

Admittedly, I went into this show with a somewhat shallow expectations — as if I were going to see New Pornographers-lite. Unfortunately, I've never actually gotten the chance to see the New Pornographers live, so I had the feeling I was making up for that fact by seeing one of their members perform with his other band. A couple months ago I did the same thing with Neko Case — which was wholly entertaining, but just not entirely my cup of tea. So, when Destroyer came on my radar, I snapped at the chance to catch their act, all with the hope they'd capture the New Pornographers gold I'd been yearning for.

I picked up Destroyer's most recent release, Trouble In Dreams, and started listening to Destroyer's Rubies as well — an album I already owned, but had never really gotten into (except for a song here and there). The days leading up to the show, to my surprise, I started soaking up the music. The title track on Destroyer's Rubies quickly became a staple on my iPod despite it's nearly ten minute running time.

Destroyer put on an impressively solid show and they are by far my favorite of the New Pornographer solo acts and side projects (er, actually I guess New Pornographers is the side project…). Bejar definitely stands out from his NP colleagues — a fact that can be established just by looking at the names of their perspective solo work. Carl Newman goes by AC Newman, essentially his given name (Allan Carl Newman), and Neko Case does the same (although sometimes adding & Her Boyfriends to the moniker), while Bejar, whose act is just as much a solo project as Newman's and Case's, mixes things up by using "Destroyer" rather than headlining with his own name — a move that establishes his modesty and, perhaps, distaste for musical celebrity.

The opening acts were an excellent setup to the main show, featuring Boston's own Mean Creek and Oakland's Colossal Yes. Mean Creek started things off with a heavy sonic display, showering the slowly trickling crowd with excellent rock rhythms. A decent group built up towards the end of their short set, but it was clear more people were set to arrive as the night lingered on. Colossal Yes turned out some great tunes with their unique triumvirate of bass, drums and keyboard (no guitar). With the keyboardist, Utrillo Kushner, carrying the vocal work and much of the rhythm, Colossal Yes played a soothing variation of piano rock. Their tone was soft and pretty — something I would not have expected by the looks of them. They also provided an ideal transition between the intensity of Mean Creek and the engrossing powers of Destroyer. Kushner ended Colossal Yes's set by slowly repeating "Destroyer" into the microphone in an attempt to get the crowd pumped for the main act of the evening. It seemed to work, as the Monday night crowd at the Middle East (which had suddenly quadrupled in size) started to make some noise.

Destroyer came onstage without any flashy buildup or pretentious introductions. They so quietly took their places that the interlude music was still blasting from the speakers as they started playing their first song. The audience didn't seem prepared for Bejar to come on stage so quickly — he had the nonchalance of a roadie and spoke no more than a few words to the packed crowd in front of him. According to an interview with NPR in 2006, touring puts Bejar in a bad mood no matter how good a show is. He is not one who seems to enjoy the spotlight.

The music came with almost no interruptions. At one point the keyboardist made a comment congratulating the Canadians in their defeat of the Bruins earlier in the evening. The Boston crowd barely seemed to take notice of the comment — a testament to how good the show was going, or a commentary on the lack of interest in hockey? I'm not sure. I just wanted more music. They brought it.

Destroyer played a decently long set — I'd say somewhere around ninety minutes of consistent energy. They were at their best when playing their longer songs, like "Rubies," "My Favorite Year," and "Libby's First Sunrise." My favorite thing about Destroyer's music is their resounding guitar and keyboard solos played atop solid walls of sound. Nearly all their songs feature this at some point, and it definitely rang out clearly in their performance. Destroyer finished their set the same way they started it — quietly coming out for a brief encore, swiftly saying goodbye, heading offstage with humble essence.

I left the show with a new respect for Destroyer as a band and for Bejar as an artist. I still love the New Pornographers, but I can see why Bejar needs to have a project like Destroyer, just as Case and Newman need their own solo careers. I imagine a New Pornographers concert to be entirely different — plenty of back and forth with the audience, a chirpy atmosphere with a friendly yet rambunctious crowd. Destroyer played with a distinct and unusual style — haunting, epic, a drunken poetry of blues mixed with occasional chaos. With Destroyer, Bejar has his own music, his own creation, and, after seeing this show, it is clearly just as good if not better than his work with the New Pornographers… But I should probably see them live before I say that.