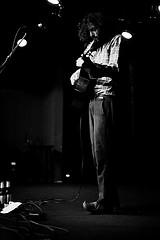 Dan Bejar has always been a source of musical mysticism for me. I adore the New Pornographers, have been through lengthy Destroyer-only phases and have grown to love Swan Lake. His odd, slightly nasally but illuminatingly piercing, voice is completely original to him and coupled with his evocative songwriting, comes close to perfection at times.

Azita opened for Dan Bejar on his solo Destroyer tour at the Crocodile on Wednesday. I'd heard bits and pieces of her work for years, but never cared for it, so I was intrigued at the billing for this show. She sang solo, along with her keyboard and a laptop propped up on a box. She had a great deal of passion in her performance, and I'm sure that there are many devoted Azita fans that swear by her work, but I found her to be overly dramatic, off-key and less than stimulating. 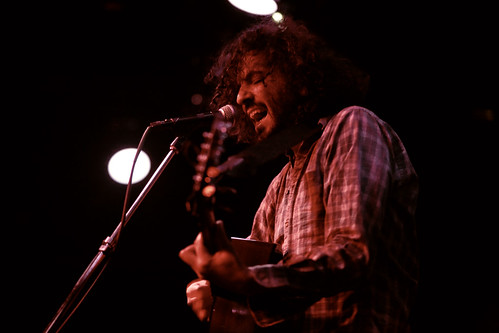 Destroyer, on the other hand, was exactly what I expected. Ideally, he would have been traveling with a full band. But in the simplicity of just Dan and his acoustic guitar you could see the root of it all, instead of his songwriting and emphatic guitar playing being awash with four other instruments. He played many songs from the last couple of records, Destroyer's Rubies and Trouble In Dreams, and a personal favorite song, "Beggars Might Ride" from Streethawk: A Seduction.

The Crocodile was full, and I noticed several rapt crowd members whispering the lyrics as he sang. Dan was easy-going and comedic, falling into a quasi-bow after each song, his curly mop of hair careening towards the ground. He quipped humorously, mentioning Bobby McFerrin and his disbelief that "Don't Worry, Be Happy" could come out of anything less than the modern marvel of GarageBand.

All in all, his performance was immaculate and his lyrics carried across the room. It wasn't the bombastic life-affirming experience that I always surreptitiously hope for, but it was a representation of himself and what he does. And that in itself couldn't be more beautiful.