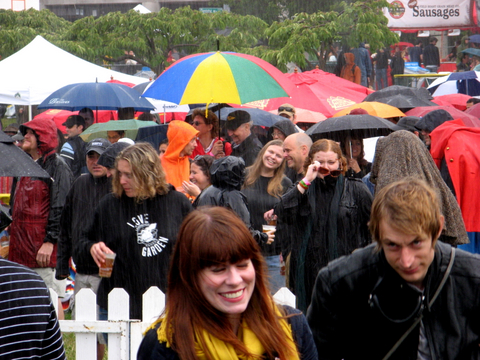 Did you outlast the rain on Saturday for the rest of the KEXP lineup?

Did you outlast the rain at the KEXP BBQ on Saturday? What did you think of the later acts?

ChrisB caught and reviewed The Saturday Knights (accompanied by Chona K's photos), but then left when rain didn't. (No dis', Chris. I did too.)

The Saturday Knights started the party off right. The 2008 release Mingle has been called the soundtrack of summer, and it was proved true on Saturday afternoon. The usual TSK party attitude was multiplied fourfold with the added band members, including one of my music crushes at the moment: drummer Trent Moorman. (Shhh. Don't tell him.)

Did anyone else notice the tambourine during the "The Gospel?" That piece of percussion was worked so hard it broke in two. That is playing the sh*t out of a song, yeah?

Then came the rain — with enough volume and volocity to make it midwest-worthy. Was that lightning, too? Hella yeah. Let's start an urban legend: break a tambourine and Mother Nature brings it on.

Poor Common Market didn't have a chance. The show must go on, they were pros, and all that. But we in the audience were just a little distracted, yo. Catch you guys again another time, k?

A personal note to all who outlasted the weather and caught more acts at the KEXP BBQ on Saturday: we need comments people.

Who stayed, and what did you think?