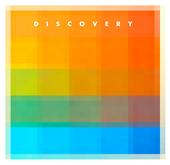 Named after a Frank Zappa quote that “discovery is not dead…it just smells funny,” indeed Discovery is not dead. It is the newborn brainchild of Wes Miles, lead singer of Ra Ra Riot, and Rostam Batmanglij, keyboardist of Vampire Weekend. And it doesn’t smell funny, but it did make me giggle. A first listen to electro R&B opener, “Orange Shirt” left me wondering– Is this a joke? After listening to all of LP, I realized, that while some of this may be tongue in cheek, it is no joke. In fact, this is serious–seriously awesome.

“Orange Shirt” is a benchmark for what to expect but there’s more to Discovery than meets the eye. LP is what a dub R Kelly spending too much time tripping on summertime in European nightclubs might sound like. Chock full of electro flavors throughout, certain tracks venture into reggae on a song like “Slang Tang,” or DJ remixes (scratches included) on a song like “Can You Discover.” Parts smack of Depeche Mode influence (“So Insane),” and others stray into Postal Service territory (“Osaka Loop Line”)–more often than not, each of their songs combine these elements.

What is really brilliant about LP is that it does what it seems to poke fun at better than a lot of people out there taking it seriously. “Carby” seems to parody a straight dance hall jam, only to rise out of the bridge with a refrain of “disco, disco, disco” into layers of it’s beats and melodies creating an exceptional example of a climatic ending to a song based on a largely unchanging beat. An example more R&B artists could follow.

The lyrical content, focused on ambivalent feelings in romantic relationships, thrives in this musical setting. The line, “I promise to leave before your mother wakes up in the morning” at the end of the “Orange Shirt” chorus is mirrored by, “I wanna be your boyfriend but I don’t want anyone to know,” from “I Wanna Be Your Boyfriend,” a track featuring Dirty Projector’s Angel Deradoorian. If, like me, you love “Stillness Is The Move” for the way it reeks of a Mariah Carey chart-topper, you’ll be all over this track.

Their cover of “I Want You Back” makes Jackson Five’s recognizable hook sound like a million xylophones are playing it at once. The lyrics zoom in and out, cementing fleeting and fickle relationships as a major theme of the album. Another cover, a spaced out and syncopated version of Ra Ra Riot’s “Can You Tell” renamed “Can You Discover,” reveals the powers at work behind Discovery.

Despite the distorted vocals and synthy overhaul on every song on this album, a faster version of Rostam’s signature keyboard chops show through on the last song of the album, “Slang Tang,” and Ezra Koening of Vampire Weekend lends her vocals to “Carby.” Rostam and Wes have taken the foundation of their indie-pop sensibilities and carved a new image out of that same solid wood.

LP promises to be a summer hit, not just because of Michael Jackson’s recent death but because it’s summer and we want to dance but we want something thought-provoking to dance to. When Discovery tours you can bet that me and all your friends will be there, waiting for the slower, calypso infused “Swing Tree” so we can pair up and promise to leave before your roommate wakes up in the morning.

Discovery’s album is coming out July 7th, but between now and then you can download it from their website and two dollars of your purchase will be donated to OXFAM, an international relief and development program.