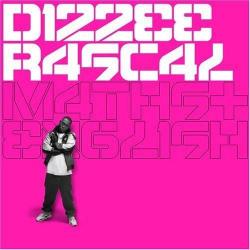 Sometimes it's a crime when an album gets released in the United Kingdom with no apparent timetable for its release into the wild stateside. It's especially baffling with the new Dizzee Rascal album. Sure, his last few albums, although critically praised, never really clicked with the mainstream American hip-hop listener. Garage was just a little too British to make it on your typical “Jammin’” station and that's why you never heard the Streets or Dizzee or Wiley in the States. However, Dizzee’s new album, Maths + English is the most “American” album he’s ever made and as a result, his most decisive album to date – I mean, in this day and age, is being called “American” an insult or praise? Whether you agree with this change in Dizzee’s sound or not, you have to admit that Dizzee deserves better in the U.S., and this album could give him just that.

I have to admit, I’ve listened to Dizzee Rascal’s first few albums and appreciated them for their innovation but never really fell in love with the discs. They were influential – supposedly “Fix Up, Look Sharp” prompted Jay-Z to record “99 Problems” – but something just never clicked with me. I always felt that Dizzee’s lyrical skills were actually not a great match for the clunky, angular Garage beats (the same might be said for Mike Skinner of the Streets too). Dizzee has a quick verbal wit that needs music with the same level of energy that his lyrics provide, and the closest he’s come to the match was his song with Basement Jaxx, “Lucky Star.” But beyond “Fix Up, Look Sharp,” “I Luv U,” and “Learn,” nothing ever felt right to me on his albums. This quandary has been solved on Maths + English, but it definitely pushes Dizzee more into the mainstream than Boy in Da Corner or Showtime ever did.

Any discussion of Maths + English has to start with “Pussy’ole (Old Skool).” The track itself doesn’t actually appear on the U.S. (currently download only) version of the album, probably thanks to the prominent sample of Rob Base and DJ E-Z Rock’s “It Takes Two,” but it really needs to be a part of the album. It, at the same time, pays tribute to old school hip-hop and expands it into Dizzee’s new world hip-hop and boy, do Dizzee even seem right and home in the confines of the song. Finally, we get a song that matches the lyrical intensity of Dizzee and a song that could appeal to pretty much anyone (except its lyrical content might keep it off the radio – but if David Banner can have a radio hit, anyone can).

Worry not, though, Dizzee has not abandoned his roots. The album officially opens with “World Outside,” which sounds the closest you might get to Dizzee performing with the Orb, like a dirtier version of “Little Fluffy Clouds." “Flex” is straight out of the Dizzee Rascal playbook, a straight up Garage dance gem while “Da Feelin’” has a very British pop feel to it, taking equal parts soul and dance n’ bass and producing an unique track. “Where’s Da G’s” starts much more like what people expect from Dizzee, with the garbage can beats and thick sequencer lines, but they slowly grow into an intricate trill and then, out of the blue, Bun B and Pimp C come in, transforming the song into a borderline hyphy piece.

“Paranoid” has a classical melody that is mixed with a grimy rhythm that meshes perfectly to create a claustrophobic mood – exactly what Dizzee wants. “Wanna Be” is a throwback, with the playful female vocals taunting ”So you wanna be a gangster?/tell me just one thing/what do you know about being a hard man?/your mom buys your bling.” Zing! It sounds like it could have worked on any of Dizzee’s discs but carries a little more meat on its bones than songs like “Dream” from Showtime obviously share the same musical DNA.

The big beats of “Sirens” are a departure for Dizzee, with the beats much closer to Jay-Z or the RZA (an odd cross-pollination), but you realize that Dizzee’s skills run circles around most rappers (but to keep the UK spin, nothing like a video about fox-hunting where Dizzee is the fox.) You could argue that “Bubbles” is Dizzee’s first foray into a “krunk” sound, with the simple beat and deep synthesizer line that drives the track. What falls out of the track is that Dizzee is built for the sound, leaving most of the fly-by-night southern rappers in the dust (please send hate mail to Erik Gonzalez, 1600 Pennsylvania Ave, Washington DC). “Bubbles” is just dirty through and through, the perfect summer cruising song (of course, you’re hearing this from a guy who drives a VW Golf, not the ideal cruising car). “Temptation” has a healthy sample from the Arctic Monkeys (now there is a UK dream team) and Dizzee takes and wraps his lyrics around the Monkeys’ guitars and vocals like they were his own. The album closes on the downright aggressive “U Can’t Tell Me Nuffin’” that almost doesn’t fit on Maths + English with its jagged and hostile beat and lyrics – yet somehow it seems the best way for Dizzee to finish.

It's hard for me to find a lot to fault on Maths + English; it just cranks out solid songs from start to finish. It might have a few tracks that just don’t click, but they seem to just fade to the background instead of derailing the disc. The real question will be whether this album can give the same notoriety that Dizzee enjoys in the UK here in the States. If anyone deserves a break, it’s Dizzee and now that he’s put together his most polished and accessible disc to date, and you can’t help but root for him. In any case, if you’ve tried Dizzee Rascal before and just didn’t get it, here is your chance to be reacquainted.