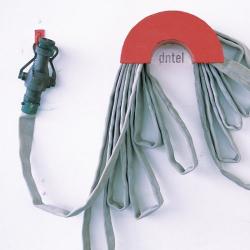 There might not be a more apt title to Dntel’s second album than Dumb Luck. How else might you explain the sort of runaway success that the first Dntel album spawned when a certain Ben Gibbard and Dntel’s Jimmy Tamborello record a song that lead to, oh, the biggest selling record in Sub Pop’s history (for those of you living on the moon, that would be the Postal Service).

With that sort of success, it’s hard to listen to Dumb Luck without trying to glean the next monster sensation hiding within its sonic confines. Much like any release by Jimmy Tamborello (see also James Figurine, the Postal Service, Figurine), it is chock full of guests. More or less every track short of the first is laden with his modern rock cohorts adding their vocals to his compositions – and with Dntel, things tend to be a little more laidback and abstract than you might expect if you’re just familiar with the Postal Service.

The opening title track is a perfect example of the slower, sweeter song of Dntel, with Jimmy taking on the lead vocals in the song of sorrow reminding us that pretty much everything is “dumb luck” and not to forget that "misfortune’s waiting for the best time to appear" but the electronic noises that swirl around the melody make it into a great sonic bubblebath but never the sort of pop candy of Give Up.

However, even in the more abstract mood that Jimmy find himself in with Dntel, there is always a core of the perfect melody. You can hear it on “To a Fault” (featuring Edward Droste of Grizzly Bear), where even though the song itself appears noisy, it is built on foundation of synthesize beauty – it ends up being one of the most satisfying of the album (for reasons I will get to soon).

Dntel does get some of his heavy-hitters on the album, like Rilo Kiley’s Jenny Lewis on “Roll On,” one of the least electronic songs on Dumb Luck – it almost feels more like a remix of Rilo Kiley than a true Dntel track. Jenny Lewis’ sweet vocals mix well with the gentle guitars and random beeps that drifting across the melody.

On the other song featuring a true modern rock star, that being Conor Oberst (you know, from that band Bright Eyes) we come across Jimmy Tamborello’s Achilles’ Heel: a lot of the time he seems to get his vocal guest to mimic his singing style, that half-spoken, sort of sleepy approach and it really detracts from the songs because if we want to hear Conor on a Dntel song, we want to hear Conor, not Conor attempting to mimic Jimmy. “Breakfast in Bed” is interesting, building from a odd, repeating melody, but it ends up just withering on the vine with the stilted delivery – you know it could be so much more, but it never gets loose. Similar pitfalls are found on “The Distance” with Andrew Broder of Fog and “I’d Like to Know” with Lali Puna.

I suppose I shouldn’t expect that the vocalist should get free range on the tracks, but all I can think is that they’re trying to sound like Jimmy – it might be a product of Jimmy’s melodies, but it takes something away from the collaborations. Dumb Luck closes out with “Dreams,” a remarkably ethereal song that makes you wish that Jimmy could collaborate with Bjork, practically recreating that electro-harp sound that the Icelandic chanteuse has mastered. It is a perfect ending to Dumb Luck because it perfectly captures the overall mood of the album, a quiet, slightly somber but not really sad atmosphere that seems to drift by much faster than you expect, like a dream or a quiet night under the stars.

Jimmy Tamborello is rapidly setting himself up as the electronic spokesman for the modern rock genus. Heck, he has enough of his own acts to keep himself on everyone’s mind and he seems to have done an excellent job in staying interesting without losing his distinctive sound. Of course, it doesn’t hurt to be half of the largest modern rock success story this side of Nirvana with the Postal Service, but Dumb Luck and Dntel, although not the same beast as Give Up keeps all us Tamborello fans satiated for another year while he decided what form he will manifest himself in for 2008.