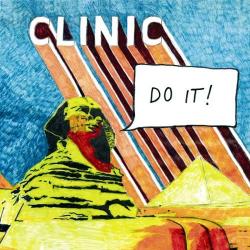 There is something appealing about an album that sounds like it was recorded completely off the cuff. There is an inherent danger with that sometimes; it can come across as sloppy, careless or a throwaway effort. However, sometimes it just works well, sounding spontaneous and electric. Clinic's Do It!, although by no means a perfect outing, is at least a fun listen filled with energy and spunk.

In a sense, Do It! sounds like Clinic traveling backwards through time and recording like a '60s garage rock band: raw and loud. That is not to say that Clinic are suddenly a 'raw and loud' band, but instead they take that thick wall-of-sound and fold it into their art-rock style. In a sense, their sound could be called 'retrofuturistic,' because I'm sure that there were many people in the late '60s that were convinced that music 40 years down the road would all sound like Clinic (minus the costumes). Even from the opening moments of “Memories” (OK, I have to admit that the real opening moments of “Memories” reminds me of “Take My Breath Away”, but after that), you get this driving, grinding guitar combined with a militaristic, marching rhythm section and oddly they all blend together with Ade Blackburn's labored (but in a good way) vocals.

“The Witch” sounds exactly what you might have expected a song by the same name by someone like the Sonics might have sounded. Clinic does an excellent job with the dichotomous nature of there music with “Free Not Free,” where you get part eerie pop rock punctuated by faux-metal jabs. In fact, whenever the guitars are brought to the front, you know they're going to be aggressive (“Shopping Bag”), otherwise they seem to fade into the periphery, letting the drums, bass and vocals take the lead (“Corpus Christi”).

However, the Jefferson Airplane meets the Stranglers is finely focused on “High Coin,” a piece of modern psychedelia that works shockingly well, while “Winged Wheel” seems to borrow more from the hollow pre-metal of Iron Butterfly.

If anything, Clinic might be best seen as a parallel universe version of Radiohead. Imagine, if you will, a world where after Pablo Honey, Radiohead became obsessed with guitars and reverb rather than technology and synthesizers. In that world, the role of Radiohead might be played by Clinic (of course, to truly work with the alternate reality, there alternate Clinic might end up sounding like Megadeth and alternate Radiohead like Clinic, but you get the point). Do It! is no masterpiece, or even the best Clinic has to offer, but it is a satisfying bunch of songs.