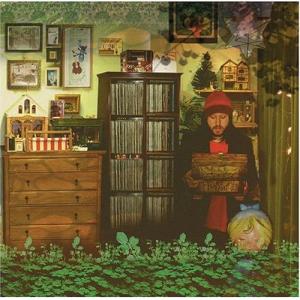 "Don't Ask Me, I'm Only the President" by Badly Drawn Boy

I’m really not cut out to be a rock and roller – I’ve come to realize this. I, honestly, don’t like to go to live shows that much. If they’re in a small venue, its usually too crowded, too loud, too dark (maybe this was because I’ve seen too many shows downstairs at the Middle East – more or less a bomb shelter with bands). If they’re in a big venue, then there are too many stimuli – people, lights, attractions – that I get overwhelmed and want to hide in a corner. I think this is probably the sign of a deeper psychosis on my part, maybe a bit of OCD mixed with social anxiety mixed with rampant paranoia, a healthy combination if you want your career path to be like Fox Mulder’s. That being said, I could never lead the rock and roll lifestyle that imaginary folks like igLiz or Betsy Boston lead – I will content myself with merely enjoying music in the comfort of my well-fortified, fully monitored and secure location. It’s like being Dick Cheney with the, you know, cold, heartless evil and pacemaker.

So, what does this have to do with the iPod Roulette? Well, in some of my moments where I think a rock and roll lifestyle might be fun, I sometimes wish I could be Badly Drawn Boy. He seems to have the sort of demeanor in his music and performance that I think I could live with, both of us being slightly off and enjoying the use of a good wool cap. He seems like he’s never entirely comfortable with all the attention, yet still can make songs that are starkly beautiful (when he doesn’t get bogged down with trying to be a 70’s singer/songwriter). “Don’t Ask Me, I’m Only the President” is a fairly obtuse protest song on One Plus One is One, an album that got unfairly maligned by critics when it came out, which is too bad. When I hear some of the gems from the disc, I feel like I really could be a pop star if I could be Badly Drawn Boy. That feeling usually doesn’t last too long before I want to go back into hiding up in the mountains (I’m not a geologist by day for nothing), but in those brief moments, I can sit back and listen and know that someone might feel the same way about rock and roll as I do.