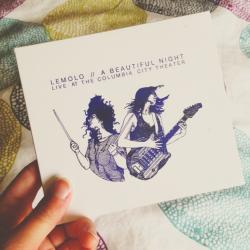 When local dream pop duo Lemolo sold out two nights at the Columbia Theatre for the release of their debut album Kaleidoscope, no one was more surprised than the artists themselves. Fortunately, their surprise didn’t stop them from thinking ahead, and they worked with local production company Creative Differences to record both shows for a DVD called Beautiful Night: Lemolo Live at the Columbia City Theatre.

The DVD includes songs from both performances interspersed with backstage moments and shots of the audience. Despite the occasionally jarring effect of switching back and forth between the two nights, the pristine sound and sharp visuals do capture the energy of the shows – especially when the crowd sings along to “Whale Song.”

No one who was there for either of those two nights in June 2012 is likely to forget it. At those shows and many more that followed over the next year, Meagan Grandall and Kendra Cox gave performances that layered impressive power and energy on top of the dreamy melodies from the album. Both played their instruments with intense physicality, and the two seemed to share a telepathic connection on stage.

But if artists made decisions like the rest of us, they would be just like the rest of us. Just when Lemolo seemed to be gaining momentum, the duo announced they were parting ways. Kendra would pursue another musical path while Meagan would continue as Lemolo. Would Meagan go the solo singer-songwriter route, or rebuild the band with new members?

Lemolo's upcoming show with Mary Lambert and Pollens (both amazing) on February 1 should answer some questions about the direction Meagan will take the project, but it’s a pretty safe bet that the new Lemolo will be gorgeous and captivating. Fans can look forward to many fabulous Lemolo concerts in the future. But the only place you’re going to see the magical duo that created Kaleidoscope is on the Beautiful Night DVD.

{Beautiful Night is available directly from the Lemolo website or on Bandcamp for $20. Tickets to the all ages February 1 show at Showbox Market are $15 advance/$18 door. Photo by Victoria VanBruinisse.}