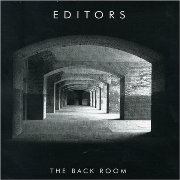 Editors, from Birmingham, England, bring an aural assault of gut-wrenching emotive lyrics and sublime melodies on their debut, Back Room.

Editors are more than the band garnering innumerable comparisons to Interpol. This four-piece deftly maneuver around "the British sound" (gloomy yet jangly rhythms, deep and dark lyrics, danceable beats), hinting at the usual predecessors (Echo & the Bunnymen, Joy Division, a bit of U2, and of course New York's finest-dressed aforementioned hipsters).

Editors' bandmates met at University in 2000. Over the course of several years their lineup and name mutated (formerly called "The Pride" and "Snowfield"); the final Editors roster features Tom Smith (vocals, guitar), Chris Urbanowicz (guitar), Russell Leetch (bass), and Ed Lay (drums). Together, the band has already made quite the impact in England and will officially release Back Room stateside in April, 2006. In the meantime they've achieved gold-record status in the UK, toured with Franz Ferdinand, and played coveted across-the-pond festivals like Glastonbury and Reading.

Editors barnstorm out of the gate, capturing a frenetic energy on the first three tracks. From there, they take it down-tempo for the contemplative "Fall." They never quite recover that first fervor as the album drifts off in its closing numbers. It's those early-on faster-paced, peaking numbers like "Lights," "Fingers in the Factories" and "Munich" that showcase Editors' emotional pull in which Smith croons his tenor over booming drums and sliding guitars. Each song is tightly wrapped into a fever pitch until the thing's about to burst. The resonant lyrics and a polished production that showcases their retro-tinged talents. You can just see the tight-jeans-and-biker-boots crowd shimmying and shaking their mop-tops.

The majority of the tracks on Back Room are tight, succinct, and unflappable. There are a few dips, but overall the album is incredibly strong for a debut. What remains to be seen is how Editors translate stateside. My bet's on instant enthusiasm. Editors will embark on a small club tour in the US in January, and then return at SXSW this April. Buy your tickets early.