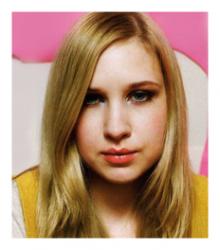 Eisley: Live and On Telephone

When you asked talented men making music it's something.
But when they are from the one family, it's worth hearing.
And what's more?
They are brothers as well.

Well, try sisters (oh and a brother and a cousin).

The three Dupree sisters can sure rock out. With the oldest at just 25 and the youngest rocking out on the piano center-stage, it's easy to be blown away by young talent, especially when this young talent opened for Coldplay at MSG when they were still in high school (Stacy the pianist was only 14 … talk about bragging rights).

I got to do what the industry calls a "phoner" with Stacy Dupree a while before the show. She was bubbly despite having done phoners all day from the bunk of their tour bus clutching her Hello Kitty pillow (she informed me of her love of Hello Kitty for a few minutes) while on their way to Illinois from just doing a show in college-town Lawrence, KS.

The 19-year-old was excited for their first full-length tour ever. Long removing themselves from the shadow as the opener, Stacy could not contain her happiness about being out on the open road with her family, a tour they started in their home state of Texas (the tour also ends in Texas).

"I'm very thankful," she kept saying … and why not? The girl has a lot going for her, from her rock with a wholesome spin edge to the love and support of her family, not to mention some sick vocals. She's the spitting image of the good girl who got everything she wanted out of life. She's also best friends with her family, a rarity these days (even Stacy admitted that, saying that her family gets along "freakishly well"). Most musical families either have super sweet images (Hanson, late '90s) or there are grumblings of hatred that ultimately end in the demise of the band (Oasis, ate '90s). Eisley is the indie-version of sweetness.

"They're my best friends," Stacy said of her fam. "I'm pretty lucky … we just hang out." Stacy has a good head resting on that Hello Kitty pillow too. Her tastes in music were normal but impressive. Her inspirations include Thom Yorke and Bjork — good role models to have. "I call them my musical mother and father," she laughed, referring to Yorke and Bjork. "They taught me everything. I am always going to be inspired by them."

At their Boston show a couple of weeks later, I was interested in seeing if Stacy's enthusiasm could outlive the long hours on the road and for the most part, I was not surprised. The Dupree sisters (Chauntelle, Sherri and Stacy) were front and center, with brother Weston on a very girly

looking set of sky blue drums and their 18-year-old cousin Garron rocking out on an equally girly sky blue bass. The boys never said anything and played their instruments dutifully.

Eisley was there to play their new album, Combinations, and a few other favorites and that was that. Sherri would occasionally ask her brother Weston how he was feeling (he was flush with fever although you'd never know it by the way he played) and would thank us for coming out, but other than that, the Dupree family wasn't here to have a conversation with us; they were here to play their instruments and harmonize in a pleasant and genial way.

Eisley played for an hour, playing most of their songs to a stilted and lifeless crowd who mouthed along sometimes (when Sherri asked us to sing along to one song, my roommate joked, "were we not supposed to sing along with the other songs?"), but after all, a Sunday night show sometimes lacks the luster and energy of a Friday night rockout. It was a doors-open-at-7 kind of night.

Their traveling family act probably isn't going away anytime soon — at least Stacy isn't. "There's isn't anything I would rather be doing," Stacy said. "I will always be a songwriter." At age 19, it's really the only life she's known.