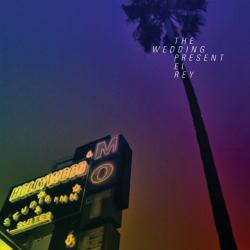 For the last year or so, the Wedding Present’s enigmatic leader, David Gedge, has been living in Los Angeles and and the city’s influence on him forms the core of El Rey, the newest offering from his group. While the album was written and demo'd in LA, the hotly anticipated album was recorded in Chicago with Steve Albini and it marks the first time that they have recorded a full-length album with him since their masterpiece, Seamonsters, in 1991. Although this dream duo might have the masses hoping for a Seamonsters, Part II, the truth is that much of El Rey is actually fairly upbeat and manages to sum up the band’s entire career with its variety of material.

Opener "Santa Ana Winds" takes off with grimy sophistication and steam. It is the most atypical song on El Rey with it’s spiky overdriven bass line that leads the track. At least two of the songs sound very much like they would have fit perfectly onto Torino by Cinerama (David Gedge’s group from 1998-2004). "I Lost the Monkey," despite the silly title, has all of the cinematic class that Cinerama was best known for and "The Trouble with Men" is a slow torch song that features some great drumming and a doleful melody. The almost whispered vocals come across the line as if they are from a desperate man who has just been dumped by his girlfriend.

"Palisades" is rife with characteristic jealously and obsessive abandon. It is perhaps the song that comes closest in sound to Seamonsters in this collection. It starts off with finger-plucked electric guitar before exploding into an angst fueled rock song. In the chorus Gedge howls out the line “You don’t love me anymore” as distorted guitars wail along with his strained vocals.

El Rey has both dark and light moments interspersed throughout. The album covers most of the territory that David Gedge has explored throughout his long career without sounding forced. The production is excellent as Steve Albini is an analog elitist, which provides a great sounding record that includes some stellar songs of heartbreak to boot.