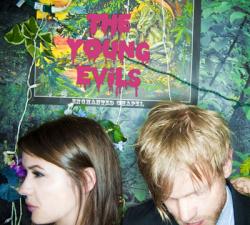 {The Young Evils have a bunch of shows coming up: 9/8 at The Crocodile, 9/25 at Easy Street Records (West Seattle), 10/9 at the Reverb Festival}

According to genius Stranger scribe Trent Moorman in a recent Line-Out interview, the debut from The Young Evils opens with a song singer/songwriter Troy Nelson wrote during Seattle’s most recent snowstorm, to cheer himself up during the isolation of being “trapped in the house for five days.”

The point is, it doesn’t sound at first like a self-soothing tune someone squeezes out from their claustrophobic loneliness, but after a few listens, Nelson’s and co-vocalist Mackenzie Mercer’s simple, acoustic guitar-pillowed singalong seems to be beating back that awkward timelessness of abandonment. “Faith to love to glory all the time”, they chime together, and then as a philosophy throughout the rest of Enchanted Chapel; “let’s just celebrate ourselves and why ask why?”

Cleanly and attractively produced by bass player (on all tracks) Barrett Jones, with additional guitar and playing on the album by Cody Hurd, Enchanted Chapel is one of the most eagerly awaited albums from the Seattle area for some time, and sounds totally worth it. There’s no gimmicks or adherence to stifling genre in any of the ten tracks created out of artfully accurate portrayals of love gone entropic (“Get Over It”), damaged people getting by (“Crazy People”), and snappy stories of rock and roll rescue and failure (“This Rock And Roll City Is Done”).

Unlike most albums you’ll hear these days, musical peak moments are spread throughout, with some of my favorite tracks near the end of the record: “Sleepwalking” for example, like the best Prefab Sprout-era pure indie pop last tapped long ago. “Two nights ago, we were kneeled down and stoned, you played me ‘My Shadow In Vain'”, with Nelson and Mercer’s vocals entwining magically about an after midnight epiphany that will delight everyone who hears it.

Strumming, crisp drumming on a kick, tambourine, and a bright blue briefcase full of melodic punk-blues defines the schema for Enchanted Chapel, and there’s no telling if the musicians involved have ever heard the various greatest hits of Aussie or New Zealand underground pop I feel here (from bands such as The Chills, Triffids, The Bats, and others).

It doesn’t matter; the Pacific NW has its own extreme climate to endure and get away from in song, even if that weather is more morale-crushing gloomy than beer-swilling balmy. The Young Evils are coming out of the gate with a gallop, like Johnny and June Carter Cash resurrected to rhapsodize over wrestling with the broken past but sure to dig new love. I sure do dig my new love: The Young Evils.