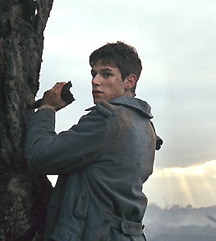 I loved me some Amélie. It got tiring, though, to hear all the subsequent moaning about how artificial it was, how it created a world that never had and never would exist, how it was (as one critic put it) "a dribbling slab of caramel taffy". Well such is cinema, my dears, and even my cynical ass couldn't resist that film's intoxicating fairytale charms. So shut up!

Well, now comes A Very Long Engagement, Amélie director Jean-Pierre Jeunet's lovely follow-up, also starring Audrey Tautou and also a delectable piece of visual candy. I've been eagerly awaiting this film adaptation of Sebastian Japrisot's famed WWI-era novel, and I'm happy to report that, like its predecessor, is also sure to stick in the craws of prudent purists around the globe. It's simply gorgeous to behold, and yes you should see it just for that reason.

Tautou plays Mathilde, a polio-stricken Frenchwoman who refuses to believe that her beloved, sinewy young childhood-sweetheart fiancé Manech (Gaspard Ulliel) is one of five soldiers killed in the trenches; she spends several post-war years schlepping around France trying to track him down. As the plot thickens (and boy does it thicken), we meet a slew of interesting characters whose lives are intertwined by the war, from an avenging-angel 'ho (Marion Cotillard, from Love Me If You Dare) to a Polish-born woman (Jodie Foster… yes, that Jodie Foster!) who goes to Desperate Housewives measures to bring her husband home from the front line. Keen and quick little digressive montages like those in Amélie help tell their stories in utterly charming ways.

Beguiling as can be, but this is definitely a war movie, with the battle sequences and gore that such films entail — all achingly, gorgeously shot by Amélie cinematographer Bruno Delbonnel and sweepingly scored by David Lynch regular Angelo Badalamenti (who also scored Jeunet's The City of Lost Children).

The cast is brilliant. Jodie Foster, for instance, is better than I've seen her in years (well, I haven't seen much of her for a while, outside David Fincher's Panic Room, anyway), and she looks magnificent thanks to Jeunet's sepia-washed palette and Triplets of Belleville-style street/city grunge. Her story is my favorite part of the film, in fact, and you just won't believe the deliciously melodramatic turn her character takes after a strange proposal from her fading husband.

That's Jeunet for you, and in fact the movie is full of the oddly unexpected — an over-the-top bedroom murder doesn't go at all how we anticipate, a weird makeshift hospital is obliterated by a truly terrifying zeppelin explosion, and the origins of a barkeep's intricate wooden hand probably could have made for a whole separate film — which hints at the only troublesome aspect of A Very Long Engagement: it just has too much. There are so many characters and tales that even the 134-minute runtime seems crammed and rather incohesive. In the end we're left with just a sadly sweet but fantastic-looking series of stories, but it's all so lovely (and the ending so very, very French) that I seriously doubt the film's target audiences will much mind the excess. Let's see if Engagement's engagement is as bountiful for the Egyptian as Amélie's was.