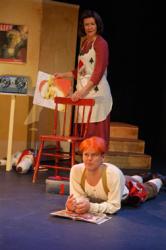 The average TIG reader (let alone the average TIG Curtain Call reader) probably isn't among the target audience for this super-cute holiday offering from the always-solid Book-It, but I can tell you without hesitation that it certainly charmed me. No easy feat, that.

Based on the popular illustrated book by Berkeley Breathed (of Bloom County and Opus fame), the story is set on Depression-era Vashon Island; the main character (Stephen Hando), a saucy 9-year-old who insists upon being called "Red" (after his favorite titular comic book character), is there visiting his Aunt Vy (fantastic Theresa Holmes) for the holidays. While there, he hears of a reclusive neighbor known as Saunder Clos (Kevin McKeon), rumored to be a retired Santa Claus, and decides to pay him a visit.

It's not all as cutesy as it sounds, and there's some pretty freaky shit to be had here, especially in the second act — a herd of bunnies providing chambery vocals to a symphonic piece about childhood outrage, an absurd party of Mr. Clos' elves (they look more Land of Oz than North Pole), a surreal menagerie of living toys that are even weirder when they break into song.

Yes, Red Ranger is a musical on top of all that, with original show-stoppin' numbers (a couple too many of those, I'd say, but why quibble), a 6-piece on-stage band, and slick choreography — all of which are always professional, but never flashy, which is pretty much what we've come to expect from Book-It. This is a short-n-sweet holiday outing sure to be loved by whatever kids (or kid-like adults) you might presently have in your life.

Yep, Carlotta and her motley Wing Ding lot are back for a fresh batch of wacky Southern-fried holiday hysteria. This year they've returned to the homey NWAS cabaret, a cozy space where you get to sit on comfy old couches that add to the illusion of visiting a bizarre relative during the Yule season.

It's as great as ever, and as usual you must go, but act fast — this season's run closes the weekend before Christmas.