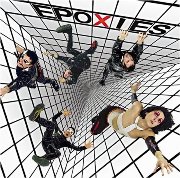 It seems like the conventional critical wisdom on The Epoxies in to peg them as a throwback 80's new wave nostalgia act and safely file them away in the kitsch drawer; a fun, fluffy band in funny costumes that shouldn't be taken too seriously. To do so, however, is to miss the huge, bloody heart that pumps away madly inside their cyborg body. Like all the best sci-fi, the lasting appeal of The Epoxies is that they have dressed up some very basic-yet-powerful stuff about love, alienation, and power in the trappings of lasers, robots, and geeky futurism.

They are also — and I can't stress this enough — massively catchy. We're talking can't-get-a-song-out-of-your-head-for-three-weeks-straight, serotonin-re-uptake-inhibiting, brain-aneurysm-inducing catchy. If you've heard them at all, you know what I mean. If you haven't, you need to. Don't say I didn't warn you. It also doesn't hurt that lead singer Roxy Epoxy, the love-child of Gary Numan and Siouxsie Sioux if ever there was one, has utterly killer pipes as well as this reviewer's hands-down vote as totally best fawking frontwoman ever personally witnessed by him.

So now that we've gotten through with the introductions, we can heave a sigh of relief that all of these elements are on display par excellence on The Epoxies newest disc, Stop The Future. Right off the bat the listener gets zapped in the ears with "Radiation," an infectious ode to the twin joys of paranoia and propaganda, followed closely by "Synthesized," a track that will be familiar to long term Epoxies from its release a few years ago as a seven inch (a release, it should be noted, that true pop fans should try to get their hands on at any cost due to the b-side inclusion of an utterly mind-blowing cover of Alice Cooper's "Clones (We're All)" that takes a song that was already pretty damn good and unequivocally owns it for the rest of fucking time).

In a way, because the band is so consistently good, it takes really insanely great tracks to truly stand out, the album's first being "Wind Me Up," a frenetic shot of sonic adrenaline that seethes with motor-mouthed venom and an undeniable energy that surely has it at the top of the charts in a more fair parallel universe. Undoubtedly only a few slots below it on the bizarro charts are "Everything Looks Beautiful On Video," which sounds like the lost love song David Cronenburg might have written while filming Videodrome, then got Debbie Harry to record between her scenes, and "No Interest," a tongue-in-cheek little Ocasek-ian gem about the perils of credit card culture.

The band saves the real smack in the head song for last though, a bonafide jaw-dropper called "Toys," that displays The Epoxies genuine emotional punch, playfulness and ungodly skill with a hook in equal parts. Acknowledging the band's new wave forebearers like New Order and Numan while looking boldly toward the next stage of their own evolution, the track should leave listener's slobbering for what's to come. If this is the future for The Epoxies, then by all means bring it on.