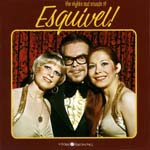 The Sights And Sounds of Esquivel

About ten years ago they began re-releasing his more squiggly oscillator-fueled experiments in "space age bachelor pad music," or what maybe what some would come to think of as Muzak. Such retro-futurist textures would inspire a lot of bands like Combustible Edison and Friends of Dean Martinez, alongside the punk-lounge splinter-genres would warble in and out of quasi-fashion (cocktail, swing, and jazz-artier pseudo-klezmer ska movements maybe).

This album was recorded by Esquivel with a crack lounge band in 1974 for a lengthy Chicago dive-club engagement that would be distributed throughout the La Margarita restaurant chain. It's not exactly the exploding plastic impeccable funky, weird stuff that was re-released back in the 90s, but it has a velour-sleaze feel in that the covers of songs like the contemporaneous "Delta Dawn" in frottage against an elegant "Rhapsody in Blue" seem like a strange, otherworldly seduction of mental oblivion.

Sharon Michaels and Yvonne DeBouron's voices soothe and soar as Jimmy "Chino" Lara switches off from keyboards and crisp-clattering percussion, with Brian Faye's Velveeta organ microwave-melting all over the Naugahyde nachos.

Listening to this record is like watching "The Virgin Suicides"—that valium-saturated sense of pantsuit purgatory played out forever on squeaky red pleather booth seats, girls with winged hair and short shorts bringing us daiquiris, as the flames of post-Vietnam hell lick up our sexual revolution-squeezed scrotums beneath the formica.

Shake your maracas and fade into the black velvet sunset with Esquivel forever.