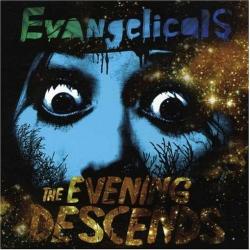 Evening descends: We open on the rear of a Cherry Red convertible, top down, on a hill overlooking the mid-sized suburban city of BELLAWOOD, a grid of amber lights stretches into the distance. The car sits surrounded by shrubbery next to a wooden sign that reads “Chastity Point,” two silhouettes can be seen jostling in the front seat.

CUT TO MEDIUM SHOT, THROUGH WINDSHIELD

A young couple converse passionately, the young man BRET leans in toward the young woman DIANE but she is resisting.

BRET
C’mon Diane, don’t be such a damn prude! You said tonight we’d go ‘all the way’; why are you being so damn frigid?!

DIANE
Damn it, I said ‘no’, Bret! You’re stoned again; take your damn hands off me! I’m not that kind of girl! Besides, I though you meant we were ‘going all the way’ to the damn dance, not up here to Chastity Point, you creep! I’m tired of your party crashing, how do you sleep?

DIANE grabs BRET’S arm from her shoulder and tosses it back at him.
BRET scoffs.

BRET
C’mon, we’ve been going steady for 2 damn months and you’ve still never let me put the moves on you. You’re as cold as snowflakes. I don’t want people to think I’ve gone soft. I mean, you love me don’t y—

DIANE (alarmed)
Bret, what was that?! I heard a noise!

BRET
I’m sure it’s nothing, relax. Here, let me hold you.

DIANE
But Bret, isn’t this the area where that Mad Scientist performed all those horrifying experiments? Didn’t the newsman say that one had escaped and was wandering around eating lusty teenagers?

BRET
Well, yeah, but nothing’s going to happen to us, we’re the main characters…. aren’t we?

SWEEP UP TO BUSHES BEHIND BRET

ENTER GIANT RUBBERY MONSTER OR SOMETHING,
ALSO THERE’S PROBABLY A UFO AND DRACULA

MONSTERGraaaaagh! I’m the SKELETON MAN! I will drink from your bloodstream! You’ll all float here in the deadlights! C’mere you lusty teenagers!

BRET and DIANE
AAAGH! He’s going to kill us! We’re totally going to be dead! Oh, why didn’t we listen to our parents and go to church or whatever!?

THE MONSTER APPROACHES, ZOOM TO TIGHT AND FADE TO BLACK

Imagine that but set to quirky indie-pop in the vein of Icarus Line, Of Montreal or a spookier My Morning Jacket. Now add some b-movie sound effects, some Theramin, sci-fi synth arpeggios and some vaudeville flourish and you’ve got an approximation of what The Evening Descends sounds like. A haunting, cheeky ride through the spook house. Creepy songs about creepy things, never afraid to wink at the camera but always ready to jump out from behind some cardboard tree in a plastic mask. This record could replace Fantomas’ Delirium Cordia as my Halloween soundtrack, and it’ll probably scare the Trick-or-Treaters less, too.