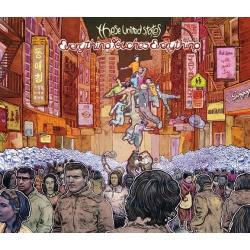 These United States are appropriately named. They’re not straight out Americana, but on Everything Touches Everything seem like John Fante driving with a really good veteran club band in a near-decimated old Caddy down Walt Whitman freeway, juking the spiritual anthem of “going out there with our hearts strapped to our chests” in the title track of their new album. “It is breath-taking just to be here.”

“Here” might be Washington D.C. and Lexington, Kentucky, where the band members are from, but I doubt they stay in either place very long, with as tight as they sound and a glance at their tour itinerary. Lead TUS Jesse Elliott’s band’s third album was released on September 1st, and they are planning both a High Dive show and a KEXP Live in-studio appearance on September 25, two performances in a long stream of dates all over the places for the next zillion months. By the time you read this, they will have played over 500 shows.

Rock critic/performance artist Camden Joy once wrote about a band called Souled American for a small press book, but that band didn’t really exist — it was a roguish roots group he projected from his own mind on to a Chicago band that bore its name. With These United States, it’s easy to hear a band that many rock fans and critics have dreamed of — the same way The Hold Steady stepped up and said worthy things in well played music that eventually had everyone on their side.

Gems like “Conquest & Consequence” have Blitzen Trapper’s bouncy quirk and religious strangeness, but less stiffly; “Night & Revolution” and “I’m Going To Assemble A City” have stories that could fit on the dark, gritty Neil Young albums everyone turns to at 3 AM after the party and when the sadness needs to be fed, if they weren’t so good-humored and more chooglin’ than chilling. They are about loss but don’t sound sad; These United States sounds like your best friends’ band, one you can’t help but love and really hope gets the credit they deserve in spite of being so nice and hopeful.

These United States are neither as depraved nor divine as The Hold Steady, but they aren’t as derivative either; and there are multitudes of meaning in this middle American rock beloved by NPR, Spin, KEXP, and other places where people with great record collections help advocate for underdog bands. The waft of Paul Westerberg will keep people coming back for the gospel shouts of “Good Bones,” while the two-lane blacktop of the title track should get them there.