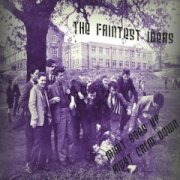 What Goes Up Must Calm Down

Really, I have nothing left to say about Sweden and its music scene. I think it's reached the point now that it would be like somehow thinking it was clever to say "Look, another great band from Britain! How novel!" We're seeing the emergence of a new superpower to challenge the twin indie superpowers of the USA and the UK and if they don't watch out, the Swedes will eat them alive. Just throw the Faintest Ideas onto that pile as they deliver an album chock-full o' hooks, wall-to-wall jangly guitars, and old-fashioned power-pop rock.

On one hand, the Faintest Ideas sounds very familiar, heck What Does Up Must Calm Down could have been recorded in 1987 as easily as 2007, but it also has a glean of something new. A lot of the time, they sound like what would happen if Conor Oberst decided to front a more punk-rooted Smiths. The Faintest Ideas don't waste a moment either, crashing through their fifteen songs in less than 29 minutes. Just take a listen to "Capitol Between Brackets" and you'll see this magnificent juxtaposition of pure pop melodies and anguished vocals.

The bombastic nature of the Faintest Ideas is a major part of what makes them so appealing (and frustrated at times) — they sound like they really need to play these songs right away. "All Stars" captures this force, where the opening riff sounds like it just needs to get played, even if the song is apparently about being really fond of one's shoes. It's hard to turn away from songs that have such intensity.

The Faintest Ideas hit their stride on songs like "Dexter's Got a Sinister Heart," "Decapitated," and "Everything is Black," where they not only keep this intensity but they also keep the noise to a controlled explosion level. "Decapitated" is an especially high point of the album, with the rolling drums and Christoffer Lärkner's and Daniel Svanhög's guitars and vocals that both mesh and clash at the same time with a surprisingly pleasant result. They get downright hand-clappy on "Nosebleeders on the Track" (which almost sounds like Smiths song title if Moz was a little snarkier). "Lose the Downside" is as down-tempo as the band gets and has a very Halo Benders-like feel to it that works quite well. The real Achilles Heel of the Faintest Ideas might be the flip side of their strength, that off-the-cuff feel to the songs. At times, you wish they had spent a little more time with the song, especially on tracks like "I Hear It But I Don't Like It" or "Nothing Will Ever Happen." These songs never really gel and just end up sounding the same.

The Faintest Ideas just add to the forces of excellent Swedish music that is out there, lurking, waiting to strike. Unlike their brethren like Jens Lekman or Jose Gonzalez, the Faintest Ideas just let rock and roll take over What Goes Up Must Calm Down and this energy is infectious. It might not be the neatest, cleaner album on the block, but it definitely is a lot of fun to hear a band enjoying themselves like the Faintest Ideas obviously do.