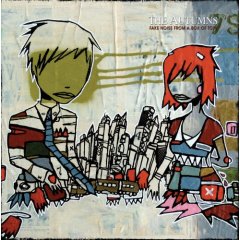 Fake Noise From A Box Of Toys

Fake Noise From a Box of Toys signals a shift in sound for the Los Angeles five-piece band, the Autumns. It's their sixth studio LP and it was consciously decided by the group that they should pursue a faster, more rock-oriented sound in order to achieve a dramatic departure of style. Their previous records were mainly marked by slow and lazy melodies. Fake Noise… literally brings about a significant change of speed for the Autumns.

The focus been put on fast tempos, with grunge and fuzz guitars displayed throughout the CD. The track "Clem" begins with a raucous guitar introduction before slowing down a bit; the slower bit sounds more natural for the band. Unfortunately, this song kicks back in and the vocals and music don't gel too well. "The Midnight Knock" is a slower Radiohead-sounding song that works much better. The guitar sounds vaguely reminiscent of "Let Down" from OK Computer and the vocals even come across sounding like Thom Yorke.

"Night Music" is one of the better songs on Fake Noise. The jazzy drumming leads the way for a slightly spooky guitar line. Abrasive electric guitar comes in, but this time the tempo is much slower and it sounds better overall. "Adelaide," on the other hand, is another fast tempo rock song that sounds out of place on the disc.

One can't help thinking that the group sounds like some kind of breed from AFI-type of southern California hard rock and Radiohead. The album works best when the group return to their signature slower material. When they perform melodic material, they are successful, but the overt rock stuff is mostly immemorable and comes across being a bit contrived.