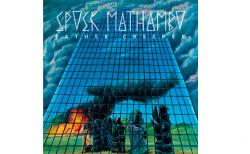 Spoek Mathambo's Father Creeper may be the sleeper of the year. It is disguised as world stew glitch brew, but its album cover somehow perfectly captures both the sturdiness and destruction: A glistening facade of a corporate building reflecting a fire and sinister Nomadic tribe leaving an accident or attack. In the face of the future, the mystery of the past destroys.

South African rapper-singer-gizmo grifter Mathambo has been criticized for relentlessness and lyrical jackassery in his mix of rock, hip-hop, and all those things rock and hip-hop fans can't easily identify. Sure, there's crunk bass and Krautrock squiggles surrounding lyrically rude and mocking low life rebellion ("We Can Work"), which actually reminds me quite a bit of a Black Rock version of best aspects of the first Shabazz Palaces EP (the self-titled one, not Of Light). It's all about shirking work and digging whatever cake is called down in SA. "Let Them Talk" is a bass-petting lost Fishbone-style ode to bodies ramping and flanks bouncing and shaking, and would have been a perfect fit on that punk-soul-ska band's best lost 80s LP. The rest shows flashes of brilliances, from the piano-dub of the title track and the leering musical tracers of "Venison Fingers."

Here's the hook: Mathambo is a trueblood trickster, the eternal slacker who just wants to play and mess with the minds of TV babies a bit. He's liable to pick up and lay down an instrument before constructing a song, but sometimes your favorite albums are like that. The use of lots of guest stars on vocals and etc. definitely double-track the Sandinista!-music-as-collective-trouble-funk vibe. If you enjoy Tuneyards but can't hang this far back near the jungle gyms, maybe you shouldn't come this far into the city for a playground.