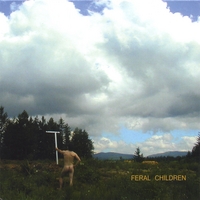 Feral Children headlined the first of the Sunday BBQ series at Chop Suey this past Sunday. They have a naked man standing a distance away in the woods on their CD cover picture. Their name means “wild, untamed, savage.” Ok, Feral Children caught my attention; but did their music?

Overall, their debut EP Eternity Emergency doesn’t quite live up to their moniker of being completely wild; you won’t be provoked to thrash around, or even heavily head bang. Overall, however, it's a good 20 minutes worth of music, and each song contains a moment of unrestrained veracity, such as the ending of first song “They’re Going to Kill Me,” which consists of a yelling chant set behind rising guitars and drums. The third song, “Baby Brother," is ihe best one of the bunch; its untamed element is the quirky electronic effects, sounding somewhere between the noise heard when dialing up the internet and a malfunctioning video game. While not quite danceable, you’ll definitely be bobbing your head along to the low-fi drums.

Feral Children’s music has a consistent feeling of forward motion, like a steady runner’s pace. There’s a touch of oldness, some place in the 1970s or 80s, but not so heavy so as to sound as if they’re trying to replicate what’s already been done. Joshua Gamble's guitar sears and soars throughout the work. Singer Jeffrey Keenan has a style sounding of drunken laziness, as if he walked into the studio with a hangover, popped open a new beer, and said, “Let’s do this thing.” [Not that this is necessarily a bad thing; Isaac Brock sounds drunk in most of his songs too.]

The CD ends with Keenan sounding almost defeated in jazzy closer “Russian Fingers/Roman Hands.” Perhaps he was tired from the previous song, “Seahorse Scores,” because the driving element had been kicked up a notion to a near sprint. This song includes indie style keys, and the begging line “don’t drown me out” will have you singing along as if one of the background singers.

So to answer my own opening question: yes, their music is legit. While they don’t quite fit their name of being savage [although the internet states they supposedly tear the stage up], their music still has feeling behind it.