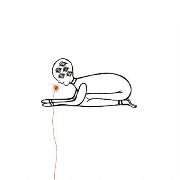 Christian Hjelm leads the Danish band Figurines with one of those wonderfully-distinctive rock voices. He's capable of flowing aching, heartbroken, but stoic vocal lines over the brittle picking, strumming, and jangling of guitarist Claus Salling Johansen, tersely and tightly wound by the rhythm section of bass player Andreas Toft and drummer Kristian Volden.

Spawned before the year 2000 by three childhood pals — Volden is the latest addition, Johansen played drums on the band's debut EP The Detour (Morningside, 2001) — Skeleton is their second full-length. But sounds like the fresh debut of a sinewy, hungry new band on twisted pop bashers like the deliciously swampy "Ambush" and the 60s beat-spank of "Remember" (both potential monster singles on smart radio stations).

However, as the album progresses, elements of country music and moody folk creep on "Ghost Towns" and "Back In The Day" respectively, the former with the beautiful line "I need someone and you need someone to love tonight — who needs someone to pick a fight?", the latter with a haunted harvest moon creepiness. The album ends on the slowed down "Release Me On The Floor," in which all the fears, laments, and ruminations of the preceding songs are resolved in a chilly bed-sit blues "wondering where it all began," a perfect epilogue for a barbed wire love cycle.

Figurines are currently preparing to tour, coming to Seattle and releasing Skeleton in March 2006 on local Seattle label The Control Group, while they dominate the top spot on their homeland radio and the Danish press continues to go ape-shit. Plus they've been nominated for a Canadian "Indie" Award for this year. The album has been likened to a lot of Pacific Northwest and New York new rock bands, but I could just as well play spot the influence with artists from my old vinyl collection, and none of that would evince the rare charm of the band's performances or compositions. Let's just say if you've been waiting for that record that takes a little while to sink in, and then you can't stop punching up various tracks as you fall in love with them, until you just start playing the thing all the way through again and again, you'll probably want to buy Skeleton.

Seattle, meet Denmark. This should be the start of a beautiful friendship.