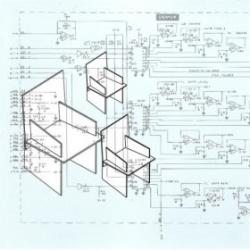 Chairs in the Arno

The 8-bit movement has not quite made its way into popular music, but ever since my sophomore crush introduced it to me nearly two years ago, I've been a big fan. So seeing the California foursome Chairs in the Arno in their promotional picture, each with their respective Gameboys in hand, warmed my heart a little, and made me eager to take a listen their debut album.

File Folder is any 8-bit lover's dream come true. Our beloved genre can go so wrong at times, what with bands like [email protected] and Horse the Band adding cacophonies of screaming vocals, but Chairs in the Arno have managed to make a simple and clean record that still retains an endearingly lo-fi quality. In an era that celebrates the sleepy, understated beats of the Postal Service and Casiotone for the Painfully Alone, Chairs in the Arno are sure to receive a warm welcome. It's difficult to describe their sound without referencing the electro-greats mentioned above, the latter of which is noted as one of Chairs' main influences. Still it's not hard to see how Chairs have made this genre their own. The soft vocals of lead singers Jeff Excell and Becca Hsu are layered throughout the record, adding an element of variety to a tune that may have otherwise fallen into banality. In many ways Excell and Hsu sound more natural in their melodic interactions than Ben Gibbard and Jenny Lewis ever did. Chairs in the Arno have perfected the tricky art of conversational singing in their song "Size Thirty." The duo's vocals are earnest and straightforward, in this song and throughout the album, and they add an endearing quality to the mechanical rhythms and space-age blips that dot the songs.

Backing Hsu and Excell is a symphony of 8-bit synthesizers crafting poppy, if at times repetitive, melodies that will make you nostalgic for past afternoons spent on the Atari. It's remarkable how the band manages to make such synthetic sounds seem so warm and familiar. To those of us who enjoy drum machines and Moogs, this record offers a pleasant balance between classic pop mentality and modern equipment.

While Chairs in the Arno are the kind of band I can fall in love with from the first electro blip, their particular style of bitpop is not for the instrumental purists. The synths can be a little harsh and those who prefer a folkier pop might find them jarring at times. And for those of you looking for stirring and meaningful songs, you'd best keep waiting for the new Death Cab album. Still, Chairs have never pretended to be writing life-changing lyrics. They said in an interview with MusicGeek.org, "[We] tried to stay away from anything too serious, some of our songs inevitably swerved towards relationships, but we harnessed that as much as we could. We just wanted to make a fun album." What they did make was an album that captures simple moments in time that almost all audiences have experienced; in "Preprogrammed Casio," they sing about cheating on a Calculus test using their advanced graphing calculators, and in the charming "Winter Song," they celebrate the end of winter, something I think every Seattleite can relate to.

File Folder is a fun and catchy debut, and I can only hope that Chairs in the Arno will continue to work together and release that sophomore album soon. The band is a little divided geographically right now; member Jeff Knight is in Seattle and Ryan Fly is in Florence, Italy, but lead singers Excell and Hsu are working on a side project called "Little Naps," which promises even more chiptune goodness than Chairs. I suggest checking out this album whether it's you're first time hearing 8-bit music or not. It's a good introduction into the wonders of Nintendo pop, and for long-time lovers of the genre it's a welcome addition to the collection.