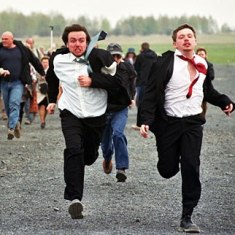 Český sen (Czech Dream), a documentary in which Czech Film Academy students Vit Klusák and Filip Remunda punk Prague with an extensive media campaign for an elaborate big-box "hypermarket" which will never exist, has been a hit on the international festival circuit for several years now. The film is gradually making its way to specialty cinemas stateside (it plays the Northwest Film Forum September 7-13), and it should be required viewing for Marketing students, media enthusiasts, and anyone interested in the perils of consumerism.

The creation of Vit and Filip's fakeout campaign — paid for with public Ministry funds, keep in mind — is documented with zippy, funny, Yes Men-style flair. There are conflicted marketeers, agency grapplers, egomaniacal ad designers, and a startling variety of audience research techniques.

Then come the results: candy-colored ads (radio, TV, and print), posters, transit kiosk boards, glossy flyers with photos of spurious store-brand products (right down to the little fruit/veg stickers), a website, and a fully-orchestrated promotional song which must be heard to be believed.

It's all amazing. Even I was wanting to shop there.

But I couldn't, and neither could the thousands of people who showed up for Český sen's advertised opening, standing at a gate looking across an expansive field at a giant, convincing façade.

The first customer in queue, a burly guy with bigtime authority issues, says that when he started seeing the ads he "thought the government came up with something dumb again" and wanted to check it out himself. A mature couple point out a rock-bottom price on "the good gherkins" they can't seem to find anymore. Later, a rather swishy guy, on the long walk to the faux storefront, asks, facetiously, "This is how we join Europe?" (With him and all the rainbow Czech Dream logo flags, it almost seems like a small-town gay-pride event.)

One can't help but feel sorry for some of the people who obviously made a great effort to show up, though — especially the physically-challenged and elderly folks in the crowd — because these aren't fat, rich, SUV-drivin' suburbanites we're talking about here. But Vit and Filip face the music (a beautiful moment of confrontation), respond to their critics (a post-hoax media frenzy follows), and learn a few lessons themselves. In the end, when the brilliant Český sen kiosk ads are removed from Prague's city streets and replaced with Lucky Strike and MasterCard posters, our wily tricksters have more than made their point.

Check out this 2004 Czech-language trailer, which punk'd its audience yet again. (I won't tell you exactly how.)