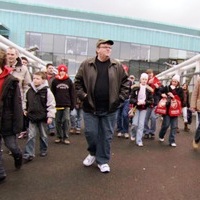 You're reading this review, so there's already a good chance you're planning to see Michael Moore's latest film, Sicko, asap. You know the filmmaker's politics and methods. You're aware that the film is his take on America's shameful health care system and even more shameful insurance industry. You've heard about the Treasury Department inquiry that resulted from Moore's transport of uninsured 9/11 rescue workers to Guantanamo Bay.

So there may not be much point in my reviewing the film here at all, or in letting you know that I find Sicko to be the most entertaining, effective, and important of Moore's films, but (on the off chance that you need convincing) here are some reasons why I liked it so much:

• Moore successfully makes a case that insurance companies and HMOs aren't helping an awful lot of people in the United States, and that universal health care is helping a lot of people elsewhere.

• Compared to his earlier work, he achieves this with fewer Moorian digressions, fewer blatantly confrontational stunts, less of Moore himself onscreen, and nary a stilted gone-too-far moment (like with Heston in Columbine).

• The filmmaker employs the devices you've come to expect: passionate but compromised messages and in-your-face style, lots of humor, a series of subjects telling their war stories (here, undeniably infuriating ones of denied insurance claims), and a plethora of info on hard day-to-day realities that many of us probably don't consider.

• Sicko is the most bipartisan of Moore's docs: Dubya and Hillary each have a turn getting hung out to dry. That's not to say that his message isn't unbalanced — no surprise there, though.

• It looks at why privatization-happy America is so far behind other nations in offering universal coverage, then examines the "socialized medicine" stigma and its ridiculous lingering connotations with Communism and the Red Scare.

• Moore travels to some of those other (healthier) countries where people contribute to health care according to means and receive according to need:

• Moore even gives a tip of the hat to one of his biggest online detractors; it would seem self-aggrandizing if it didn't relate directly to the subject at hand.

• That aforementioned trip to Guantanamo Bay begins as a stunt, and ends with one of the most touching movie moments this year. I dare you not to be moved.