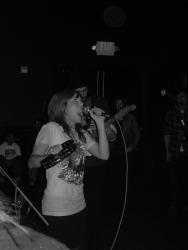 Sunday afternoon at the Vera Project was a punk show that, thirty years earlier, might have looked like a bill at CBGB’s; albeit one with much less cheap beer and presumably cleaner restrooms.

Four different bands, all punk in one way or another, played to a crowd of about 100 people early into the evening, just as it was starting to snow in Seattle Center. Three of the bands were local: Talbot Tagora, Flexions and TacocaT and they were supporting the headliners, Finally Punk – an all-girl, 3 chord neo-riot grrrl group from Austin.

I missed most of Talbot Tagora’s set because it started earlier than I expected (at 4:30 pm) but I liked what I heard. They were the most aggressive and loudest band on the bill, from what I could tell. Set up on the floor (as were the other three bands), the three-piece consists of two guitarists and a drummer. From what I heard, they mine similar territory as Abe Vigoda and Sonic Youth with dual guitar-driven experimental melodies.

The second band was Flexions and they were a very pleasant discovery. They were two guys, guitarist Devin Welch and bassist Robin Stein (who also played keys on a few songs) and they were backed by a drum machine supplying the beat. The programmed beats supplied an interesting contrast because they were funky and futurist and the guitar parts were mostly classic rock-ish. Welch’s guitar parts were immediately accessible and recognizable. He at times sounded like a blues guitarist, other times with a better groove, like Keith Richards over a drum beat. Stein’s basslines also stood out and had a better sense of controlling the rhythm than the loopy drum tracks supplied. Only the first and last songs contained lyrics, and even then they were an after-thought to the interplay between the guitars and bass. The most technically proficient band on the bill tonight, Flexions reminded me of Television, who was punk because they came from the same scene as punks and because we say they were.

The palindromic TacocaT was the band I was most interested in seeing and found they were better than they had any right to being. Often dismissed as a joke band, TacocaT has surprisingly good pop instincts with a rough, unpolished riot grrrl sound. From what I’ve read, they have a fondness for covering Bikini Kill in concert (although not this night) and that’s who their sound immediately brings to mind. They have a similar lineup (three women and a male guitarist) and sing about personal women’s issues. Bikini Kill, however, saw the personal as political and TacocaT sees the personal as really funny (they’ve got songs about muffin tops, wearing leotards, and one about wishing death upon the star of “Waterworld”. Moreover, Donita Sparks of the riot grrrl band L7 was known for throwing her used tampons into the crowd and TacocaT writes songs about having a urinary tract infection. Close enough, right?

Tacocat might be the goofy band that plays your party – except they write very catchy songs and don’t let the pop hooks get drowned out by the loud, messy guitar parts. Like The Ramones, most of Tacocat’s songs are around two minutes. They blew through ten songs in about twenty minutes. Singer Emily Nokes, whose hair might be the brightest shade of red I’ve ever seen, has a magnetic stage presence and her voice is very melodic. They are a fun band that has zero pretension and doesn’t take themselves too seriously. I think the moment they start, the joke will be over. In the meantime, I’m going to try to catch every upcoming TacocaT show I can.

The headlining band was Finally Punk, as mentioned previously, an all-girl band from Austin. They were fun and energetic as well. From what I could tell, they rotated instruments after each song and each band member each sang lead vocals on at least one song, with varying degrees of success. They’re closest to TacocaT on this lineup because they also played short, fast pop punk songs. Although I found TacocaT to have catchier songs, Finally Punk are more proficient musicians.

After Finally Punk’s short set (about twenty minutes) it was time to head back out in the snow but for the previous few hours it was a great evening featuring four very good and diverse punk bands.

It was the first show of 2009 that I saw and already the year is off to a great start.