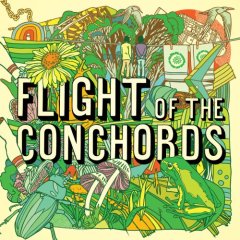 Not having cable, my first exposure to Kiwi comedy/indie-rock duo Flight of the Conchords was a perfect scenario — drinking the delicious and strong (and deliciously strong) Bloody Marys at Cafe Racer in the Ravenna neighborhood with other people watching it. It was a chilly Saturday afternoon, and the funny, also-drunk bartender was playing some homemade videos of the HBO show featuring the band on the above-the-bar TV. The DVD set hadn't been released yet. The bartender was laughing with a few of the lovable weirdo regulars who hang out at Racer, but because I was trying to read The Psychic Soviet by Ian Svenonius, I was initially more annoyed than drawn in. That's the thing about the best comedy — it takes an affectionate focus of concentration to appreciate it, and when I finally gave in to the laughter-pressure of my bar peers, I too fell in love with the subtle, indie-rock immigrant-everyman musical comedy of transplanted-to-Brooklyn New Zealanders Jemaine Clement and Bret McKenzie (a set-up which actually seems sort of made up). And laughing with other people slurping libation tends to end in full conversion.

Since that time, my wife and I have had friends over to our apartment to watch episodes of Flight of the Conchords, especially the one with a thinly-disguised Bowie (from the glam, post-punk, and pathetic '80s eras) imitator giving advice to his emotionally stressed partner in the band. I could try to make that description funnier, but you know that maxim about explaining comedy (attempting to describe a joke takes all the joke out of it). We really enjoyed the Sub Pop debut EP that came out a few months ago, too, which I only got around to really listening to after digging the series at the Cafe. "Robots" on it was a particular fave, because nothing is funnier than our imminent demise at the whims of technology right now. "Business Time" was the closest moment — the most personally cutting, considering we um, well, Wednesdays is OUR "business time" too for "sweet weekly love." (And she puts on that old t-shirt from some work thing a few years ago, with the curry stain …) Probably more than what you wanted to know, but I think more than a few couples identify, owing to its adored status as comedy song of the year. (We also were driven to check out Eagle Vs. Shark from Scarecrow Video — which got lame reviews here, but Jemaine made a movie just as funny as his show with Bret.)

The much-anticipated self-titled full-length does not disappoint; the EP was indeed a sampler, and maybe those two songs shouldn't have been repeated, as they seem tacked on to the less well known joys here. (Less well known for me especially, as I am not a You Tube junkie.) From the between-the-eyes French-o-philia of "Foux de Fafa" (one of the best scenes on the show, and I have to admit I thought they actually had speaking French down the first few times I heard it) to the hook-laden hip-hop satire of bleeped profanity of "Mutha'uckers," Clement and McKenzie single (duo?) handedly prove that hilarity and chops go perfectly fine together. Several nations of sweater-wearing, acoustic guitar-strumming, bedroom chamber pop guys and gals who love '70s soul and current bounce styles won't be able to resist this generous 15-track joyride.

The album does raise questions on how we're supposed to take the band — as much as I love the Pet Shop Boys parody "Inner City Pressure," it's so close it scrapes Weird Al territory, while "Business Time" channels Barry White with less — because I think we really want them to stick around a while, and not be satirical novelties. Their humor is too close to our own, to the jokes we tell each other, that the idea of this moment passing in our lives seems like an expiration date on our own jokes and ideas. Also, leaving out the less directly imitative songs like "Bret, You've Got It Going On" makes their first album seem less playful and creative, and more about referring to other people's work. But considering how delicious these grooves are, and how delightful the gentle humor is, I can't imagine the Flight of the Conchords just getting it on more than one day a week from here.