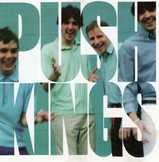 "Florida" by the Push Kings

I’ve already discussed the Push Kings once on the Spin but hey, I have a lot of their music on my iPod. And rightly so. Their debut album, Push Kings, is one of those little pop masterpieces of the 1990’s that everyone should have in their record collection. Every track is a little nugget of perfect pop songwriting, even if the Garety brothers do happen to try a little too hard sometimes to sound like John and Paul. However, on “Florida,” the Push Kings restrain their obvious Beatles-loving tendencies for a moment and instead head off into a sort of Beach Boys-meets-the-Everly-Brothers sort of space. What we end up with is a complete sugar-coated treat, like a chocolate sundae on a hot day. The guitars are glimmering over the melody and the the vocal harmonies make you want to wrap up with them on a cold morning. “Florida” is one of those songs that captures the mood of a setting (this being a nice warm oceanside setting) that it is impossible to not feel the sun on your skin when the song is playing. It is the sort of song that convinces you that if the Push Kings came around in 1962 they would have been monster stars, at least with the kids partying on the beach.