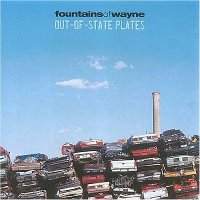 Listening to a two-disc collection of b-sides can be akin to having dinner at the Old Country Buffet. There's often a lot for consumption, and it is not going to be too terribly expensive — but in the end it is still not very good. In that sense, New Jersey's Fountains of Wayne's latest, Out-of-State Plates is no exception.

Plates was released, presumably, to appease FOW fans who have been eagerly anticipating a follow-up to their 2003 masterpiece, Welcome Interstate Managers, their third full-length album that earned the band a Grammy nomination for Best New Artist making them leaders of the ridiculously named "power pop" genre (thanks to the song "Stacy's Mom"). Whether or not their claims to fame are apt or not, Fountains of Wayne earned their fanbase by writing songs for socially awkward people in their twenties and thirties who just are not quite ready for the real world.

Even though some of the songs on Plates appear unfinished, FOW prove that they still have a knack for capturing mundane life in suburbia. One highlight is "I'll Do The Driving" — which is sonically very similar to "Supercollider" from Managers. It is a tale of a relationship where the connection is not cerebral. It contains the clever lyrics, "We're out, the jukebox plays 'Jumpin' Jack Flash' / She says 'I love Johnny Cash — The Man In Red' / I turn my head and pretend I don't hear what she said."

Some of the songs are a little kitsch-y, particularly "California Sex Lawyer" and "I Want an Alien for Christmas". But the single "Maureen" is as catchy as anything in the deep FOW catalogue while their stripped-down, slowed-down version of Britney Spears's "…Baby One More Time" brings in a bit of hook-laden novelty.

Plates is nothing if not a gentle reminder to revisit the previous output. And it should spurn the newly converted to seek out the same previous albums — Managers in particular for FOW is arguably the best pop rock band in America today. While you may not start with Out-of-State Plates, chances are you will end up there.