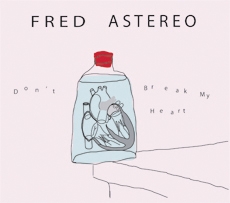 Fred Astereo’s Don’t Break My Heart is one of those albums that has a lot of promise buried in it, poking out on the surface where the erosion has exposed it. It is rough on the edges, needs some serious work on the production, but the songwriting chops are there. Don’t Break My Heart does have charm in spades and really, sometimes that is all you need to have a willing audience eating out of your hand.

Fred Astereo is sort of a Jens Lekman meets 70’s mellow pop rock with a heavy dose of the minimalist goofiness of James Kochalka. Yeah, really, it’s just like that. The title track is a bittersweet pop song that could be straight off the Barry Manilow back catalog, right down to the sort of cheap synthesizer sound driving the rhythm – we all love the “slow samba” setting on our Casios too. Not that there is anything particularly wrong with that, but man, if Fred had a little more production on this track, it would be a future karaoke tear jerker. On the other hand, the lo-fi sounds of Fred Astereo work to his advantage on the ukulele number, “Chuck it Out,” a charming sort-of-anti-love-song where Fred laments ”Is that your new boyfriend?/He looks a lot like me/but he seems happy/and I’m steeped in misery”. Some other charmers include “With the Exception of Saturn,” a sort of astronomical ode that dabbles in rings and orbital inclination, and “The Loneliest Guy,” a bit of 1950’s sock hop number except that he seems to reference killing his love (in an strange, offhand way). “Peas Don’t Ask for an Apology” is catchy pop song that has a sort of lo-fi 1980’s rock sound to it while “It’s Unofficial” takes on snyth-pop straight on. That song ends up taking a page from Future Bible Heroes and Freezepop with its stripped down synthsizer. Magnetic Fields never seems far from Fred Astereo and just hearing “When I Was Young and Cavalier” and you can tell there is Merritt on the mind. The song itself is bouncy and fun, especially with its emphasis on such an underused word like “cavalier” (nice job, Fred.) “Goodbye Cruel World” ends the album, with Fred feigning a Stephin Merritt voice over hushed backing vocals and the ubiquitous ukulele. It is a gem, tender and slow without getting too dark and ominous considering the subject matter.

Don’t Break My Heart is awfully cute and cuddly, but in a dark sort of way, maybe like a small owl that has a dead mouse in its claw. Yes, the owl is sure cute, with its big eyes and small feet and the mouse has its charms, but there is also something just a little off about the whole scene. That being said (and trying not to mix too many metaphors), Fred Astereo will definitely please all the folks into their off-kilter singer-songwriters, but he might need a few more innings in the minors before he’s ready for the big leagues.