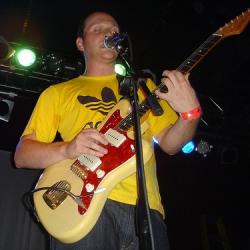 Neumos, like many of Seattle's mid-sized venues this time of year, is like a half-nuked frozen burrito: chilly on the outside, slowly steaming up on the inside. If you want to save on your heating bill this winter, go catch a show. The combined body heat will warm you up and you might just find someone to keep that fuzzy good-music feeling going throughout our long, sort-of-cold nights.

If you showed up on time for the Fujiya & Miyagi show Wednesday night, though, you would have been hard pressed to find that warm lovin' feeling. Canadian border guards must still be upset about British colonialization because the three members of Brit-band Fujiya & Miyagi were held up at the border for a whopping six and a half hours, delaying the show and driving early birds into the remodeled Moe bar or smoking circles out on the street. 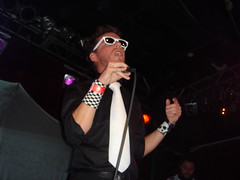 When Project Jenny, Project Jan finally took the stage, the audience was noticeably thinned. You couldn't tell, though, by the amount of energy that vocalist Jeremy Haines was pumping out. The opening song began with a fanfare and Haines screaming a few "oys" into the mike, then the bass kicked in and the dancing began. While programmer/keyboardist Sammy Rubin was body-bopping over his instruments, Haines began schmoozing around the stage with moves that beat down the "white guys can't dance" school of thought with a 2×4. As the front man for a two person techno-beat band with streaming old-school film clips in the back, it seemed like Haines' goal was to lead the dancing by example; slowly but surely, people started trickling onto the floor and a few intrepid souls began shuffling their own shoes. During "Summertime," the bass beats were so strong that you were vibrated into movement (whether you wanted to or not). When you combine the skillfully-selected variety of sound sampling that Project Jenny, Project Jan combines with borderline Gorillaz vocals and a stream of "Meet the Feebles," booty-shaking strippers and "Redwall" videos that play behind them – it all adds up to no surprise that by the end of the set the audience had tripled and people were movin' to the groovin'.

Looking wrung out by their long tea party with the border guards, Fujiya & Miyagi finally hit the stage around 11:30 p.m. to a full crowd of fans. Without any introduction (as if there was a need for one), programmer/keyboardist Steve Lewis (Fujiya) plunged straight into the familiar beat for the band's calling card, "Ankle Injuries." Screams from rabid fangirls drowned out the beginnings to David Best's (Miyagi's) soft-spoken vocals, but the crowd quieted down into a mass of moving arms and bodies as Best chanted "Fujiya & Miyagi, Fujiya & Miyagi" into the microphone with the thick quality of concentration usually only seen in cans of orange juice.

Alongside Lewis' strong and continuous drum beat, Best captivated the audience with aspirated "uhs" during the new punk-funk song cleverly titled "Uh" (currently only available on vinyl or from shady Internet sources). While the crowd danced throughout the whole set, it wasn't until Fujiya & Miyagi played their hit "Collarbone" that the dance floor exploded. The lo-fi electro-native blended so smoothly with the band's calm harmonic statement that they've "got to get a new pair of shoes, to kick it with her, not kick it with you" that bodies reacted by naturally flowing into some sort of movement, even if it was just head-bobbing.

After the show was over and the usual encore clapping ensued, Fujiya & Miyagi popped back on stage within 30 seconds of leaving it; although their energy was noticeably dimmed, the performance of "Pussy Footing" was perfecto-electro and fans were satisfied with the lingering bass beat echoes as they went out into the night.