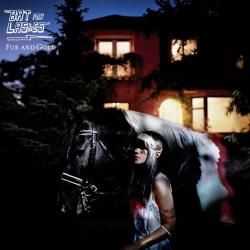 Bat for Lashes’ Natasha Khan follows the same path as predecessors like Patti Smith, Polly Jean Harvey, and Chan Marshall, existing as a whirling storm of creative energies. The sounds that are constructed by Khan on Bat for Lashes’ debut, Fur and Gold, are culled from such disparate sources as a well-tuned harpsichord to rain falling outside a window. These sonic collages are some of the most refreshing compositions that you will hear this year, leaving you with the distinct impression that Natasha Khan is one of the most promising new artists in music today.

Bat for Lashes has a lot of high profile fans like Jarvis Cocker, Devendra Banhart, and Thom Yorke. This admiration goes both ways as right off the bat on “Horse & I” you can hear the influence of Radiohead. “Horse & I” sounds like fusion of Bjork and Radiohead, with a marching beat and hammered harpsichord combined with intricately interwoven vocals. The harpsichord is a recurrent instrument throughout Fur and Gold. On “What is a Girl To Do,” Khan takes on more of a 60’s pop throwback sound, if 60’s pop was dark and sinister. Instead, her hushed vocals combined with the lush production recalls Black Box Recorder at its height. The highlight of the album might be “Prescilla,” a piece that taps into PJ Harvey (circa To Bring You My Love) but builds on that platform by adding in a rhythm section of handclaps and footstomps that develop an organic feel to the work. The most remarkable thing about the track is that it can, at the same time, feel entirely new and entirely familiar.

Khan obviously has a predilection for darker tones, such as “Trophy” where the sinister mood is amplified by guest vocalist Josh Pearson (who sounds a lot like Moby), creating a fusion of Bjork’s esoteric atmospheres and PJ Harvey’s ominous attitude. “Say Eyes” is even more stripped down, reducing the formula to merely Khan’s vocals and a deeply resonant piano; you can practically feel her lips intoning each word into the microphone. “Seal Jubilee” is another somber dirge that echoes around like a fading memory, constructed on a starkly beautiful foundation of strings, guitar, and piano. She can also take on the persona of a true chanteuse. “I Saw a Light” has a very Rufus Wainwright feel, taking the dominant piano and mixing it slowly into a building thunder of guitar and drums, with Khan howling over the din until it collapses into a simple ballad. The album closes with the passionate “I’m on Fire,” a lament of lost love (and a Springsteen cover!) that leaves you wishing that she wasn’t done just yet as the haunting piano and harpsichord fades into Khan’s plaintive vocals.

Fur and Gold is one of the most impressive debuts I’ve heard this year. Bat for Lashes not only attempts to construct an album of melancholy tones, but also makes them seem like only the tip of the musical iceberg for Khan. The entire album comes across as a long, somewhat frightening dream that wraps the listeners in its dark cloak. Like those dreams, what Fur and Gold offers is a journey into holistic modern rock that can derive its inspiration from almost anywhere.