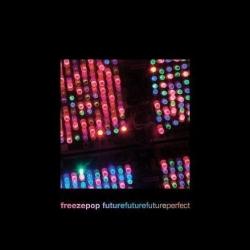 On Future Future Future Perfect, Freezepop's third full-length album and their first on Cordless/Rycodisk, Liz Enthusiasm sings, "pop music is not a crime." The sentiment is nothing new (heck, it's the same message conveyed on M's "Pop Musik" in 1979) and on FFFP Freezepop continue to carry the torch for fun, blippy, bleepy electronica with 2007 infectiousness.

Listening to Future Future Future Perfect isn't so different from listening to their previous album Fancy Ultra-Fresh (2004). Just as I did with the songs on Fancy, I still visualize guys in skinny ties and girls dancing like Molly Ringwald and Ally Sheedy in The Breakfast Club (especially with the song "Brainpower"). "Thought Balloon" is a sweet song that lodges itself in my head somewhere near Thomson Twins' "If You Were Here." "Swimming Pool" proves less is more and actually makes me feel like I'm there at the pool in the middle of the night with only the lone light in the pool to guide the way. The music fades as we dive in and under.

Besides the lack of differentialtion between this and their previous releases and lack of depth beyond its "manic poppiness," the album lacks a sense of cohesiveness or flow. I would have left the opening song, "Less Talk More Rokk" off the album altogether. It may be the lead single and carrying a lot of weight from being on the popular Guitar Hero II video game, but it doesn't mesh with the rest of the album. I would have chosen "Swimming Pool" to be the last song. This lack of flow makes me wonder how often I would listen to the album as a whole.

Future Future Future Perfect settles into happy familiar electronica territory for Freezepop. Does it need to be any more complicated than that?