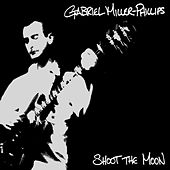 A folk artist in the traditional sense, Miller-Phillips doesn’t rely on drums or bass lines to move the track, but rather lets the story push the song forward, using his guitar as gentle accompaniment for the lyrical yarns being spun. From the EP’s opener, “Leave Him Alone,” Miller-Phillips sets the stage for the rest of the album. A soft and soothing stripped-down ballad, it easily and gracefully walks the line between campfire standards and classical baroque pop.

“Tough Love” is the album’s most instrumentally rich track, softly infusing a minimalist drumbeat and a warm electric guitar melody. This track shows the potential of Miller-Phillips – revealing that while a gifted solo artist, we could see very important things from him when he combines his keen sense of melody with a full-band experience. “Baby’s A Big Girl Now” is a superb piece of musicianship reminiscent of Elliot Smith at his softest times, while the disc’s title track, “Shoot the Moon” feels like an old foreboding folk ballad, complete with a subtle and chilling harmonica solo. This track is arguably the record’s best, one that allows Miller-Phillips to create a lush and hauntingly alive setting with a very limited set of tools at his disposal.

While the lack of instrumentation on this record does affect the diversity of the tracks, Miller-Phillips successfully keeps his music interesting with creative vocal melodies and an almost wounded delivery.

As far as singer-songwriters are concerned, it's been awhile since I’ve heard anything that compares to the caliber of Shoot the Moon. I’m impressed with the quality of the material on the album, especially in the limiting form of an EP. While this album is a good taste of his abilities, I am excited to hear what Miller-Phillips’ talent will sound like when it is given the space to expand over a full-length release.