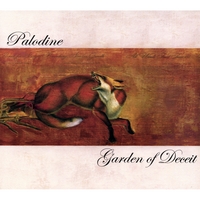 Palodine returns for their second full-length with the current line-up: Katrina Whitney, who plays keyboards, toys, and tools, writes the words (and sings them), and Michael Aryan, who plays guitars, banjo, dobro, bass, percussion, and keyboard. Together they create telluric rock like they're several people who live on a commune in the desert on nothing but visions of apocalypse from violent fasts deep into the hollow earth. Aryn is the son of a Missouri coal miner. Whitney's family were a tight Mormon tribe from Holland who came to the States right after World War Two.

There are inscriptions around the outer edge of the compact disc itself on the band's mature, textured follow-up. There are two quotes: the first is from the Qumran-Essene texts of the Dead Sea Scrolls, and the second quotation is from Southern grotesque author Flannery O'Connor — "the truth does not change according to our ability to stomach it."

O'Connor was a novelist and a short story writer, a woman who did not flinch from unequivocally describing the darkness in people's souls — and Whitney has no problem singing about it either. Both of those lines above printed on the CD deal with deception and truth, and fittingly the very last line of the last song on the record, "Magdalene," is "The truth is good when you're looking. The truth is good."

Desmond Shea mixed the bramble and bracken-covered Garden of Deceit. He was a former member of Tarnation (4AD Records) and has produced and worked with Diamonda Galas (!), Paula Frazer (ex-Tarnation), Court & Spark, and Einsturzende Neubauten. The dense tangle of acoustic instruments strummed along with the swirls from Whitney's Micro Korg scrape along perfectly together — as Aryn raises a backwoods boom-bap ruckus beneath. Songs like the monster "Woman of Cain" feel like the Tubal-Cain himself creating the first lamentation in the very first City born.

Palodine has performed shows with Low and David Eugene Edwards (16 Horsepower, Woven Hand) and that makes a hell of a lot of sense. Garden of Deceit is an allusion to mankind being deceived — "Sweet Mouth, Black Heart" one of the stronger images, and a recurrent theme. The illustrations in the album's elegant but sinister cover design resplendently display tempting fruit and animals being trapped and in pain. The music often seduces and punishes like nature — and the supernatural — itself.

{Full imaginary disclosure: writer Chris Estey was recently hired to do publicity work for Palodine, though he began after this review was written.}