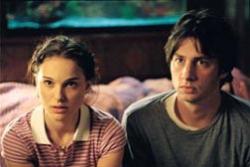 "Raise your hand if you saw some breasts today"

Something very subtle happens in the middle of the film Garden State. It is almost imperceptible. Seeing the film for the second time I could feel it coming, and I watched for it. And, sure enough, there is a brief fade to black to note the transition. It is at this point that Garden State transforms itself: a film that is quirky and visually interesting but perhaps is trying too hard becomes a film that confidently allows the story and acting to take over. It is just the kind of American independent film I love the most — small, personal, subtle but confident, finely crafted, and, most importantly, strong in ideas and character.

Garden State is the first film written and directed by Zach Braff, best known as That Guy From The TV Show Scrubs. Braff's character and the over-the-top postmodern antics of the show put Scrubs in the love-it-or-hate-it category. (Me, I think it's pretty ok.) But this film shows a completely different side of Braff the actor, and it also shows that Mr. Braff has a few ideas in his head about plot, visual style, character, and life. Word has it that he pitched the script around Hollywood with a mixed tape of the music that inspired him while writing the film. And sure enough, the use of music (The Shins, Frou Frou, Thievery Corporation, Nick Drake, etc.) wedded to image feels organic and pitch-perfect throughout.

The story is not terribly original, but it has a modern twist. Boy is lost in an existential haze. Boy meets girl and the power of love shakes him loose from his lethargy. (The modern twist is that much of his stupor comes from a medicine cabinet full of antidepressants.) It is easy to reference The Graduate, but I doubt Braff had in mind a remake. This is his story told his own way, even if it is an old tried and true yarn.

Braff plays the lead character, Andrew Largeman, a barely-working actor in Los Angeles, who travels back to his home in New Jersey upon hearing of the mother's death. He obviously hasn't been home in a long time, and his relationship with his father (Ian Holm) is cool and distant. We soon discover that an old family tragedy and the subsequent sadness and blame are the cause of their distant relationship (and the aforementioned cabinet full of aforementioned pills). At the funeral, Largeman runs into some of his boyhood friends, who happen to be gravediggers; they reintroduce him to the world he left behind. He also meets a strange, sweet girl named Sam (Natalie Portman). They start a tentative friendship, and he is introduced to her living situation: still living with her mother, along with an African student they've adopted, and more animals than one can count. This earthy, happy home where people hug each other is in stark contrast to the minimalist and cold home of Braff's father.

Anyway, small adventures ensue with the girl and the friends. Near the end of the film there is a minor journey led by Largeman's friend Mark (Peter Sarsgaard). Due to what we know of Mark's character so far — a mix of latent hostility and fringe activities — Largeman (and the audience) experience a sense of unease about this secret quest. As the journey develops, we fear that Mark is taking the gang to some New Jersey version of hell, complete with a bottomless chasm and a boatman to take them over the river Styx. But surprisingly, they don't end up in hell after all; they end up in a place that affirms life, and establishes a clear choice for the Largeman character — a choice between whether life is to be suppressed to numbness, or just fucking lived.