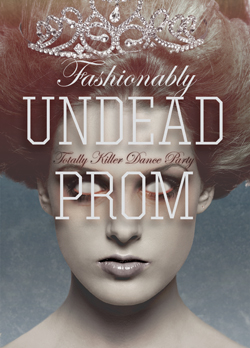 Get judged by Imaginary Amie at EMP's Fashionably Undead Bash! {10/6}

It's no secret that October is my favorite month, because I think Halloween is the BEST THING EVER — and also, I love horror movies. Duh. So when the fine folks at EMP asked me to be a costume contest judge at their Fashionably Undead Prom this year I totally freaked out and started screaming (with glee, not terror) about how awesome it's going to be!

To celebrate another one of my favorite things ever, the Can't Look Away: the Lure of Horror Film exhibit, which is getting shiny new things added from Shaun of the Dead, Buffy the Vampire Slayer (eee! I'm already wow'd by the inclusion of Mr. Pointy and am super excited to see what else they add), and The Blair Witch Project, they're throwing another awesomely horrific hoedown with 80s music from "Stake it Up" (aka; All Mixed Up), DJ Severed Hans (ha!), tarot card readings, Carrie and Teen Wolf-inspired flashbacks, spiked punch (hopefully not LITERALLY, but you never know!), flashlight tours, a photo booth, hair and makeup stylings by VAIN, and a costume contest for the honor of being named Prom King and Queen!!!

We've also got two pairs of tickets to giveaway, people! Send an email to us at tig {at} threeimaginarygirls {dot} com with the subject line "You’ve got red on you" anytime between now and noon on Wednesday, October 3. We'll choose a winner Wednesday afternoon, and send you an email letting you know that you (and your choice of +1) are on the list for the Prom.

Although I can't promise that a bucket of pig's blood won't be involved, I can promise that EMP knows how to throw a party of epic proportions, and I can't wait to see all the amazing costume creations y'all come up with. And this shindig happens early enough in the month that it won't interfere with all your other spooky Halloween-y plans! There are some rules around costumes, you guys, so check 'em out before you put yours together and join me for all night dancing — and judgement! but I mean the good kind. Totally the good kind.