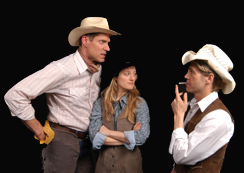 Giant and The Constant Wife

The striking image of a cowboy silhouetted against a wide blue sky bookends Giant, the latest fantastic Book-It offering currently gracing our local stages. A tough, gripping, and surprisingly timely look at passion and politics in the Lone Star state, it's a beefy slice of Americana that should not be missed.

Based on the 1952 novel by Pulitzer-winner Edna Ferber, Giant tells the story of the corrupt and powerful Benedict family through the eyes of an outsider: an outspoken D.C.-area intellectual named Lesie (utterly fantastic Jennifer Lee Taylor) who becomes the wife of cocky Bick Benedict (David Drummond) and moves South with him to the family's 2.5-million-acre ranch. (When you see the play — and, again, you gotta — don't be thrown off by the hasty exposition, because once Leslie and Bick step off an imaginary train and into the sunny vastness of Texas you'll be hooked.) At first there's wonder and expectation aplenty, but it doesn't take long for Leslie to realize that the Benedicts are as rich in land, cattle, and entitlement as they are in bias, bitter feuds, and big-time political aspirations. (Corporate corruption, labor injustice, vote-tampering… remind you of the little giant currently running our country?)

Things begin to unravel for Leslie when the actions of a resentful and unstable farmhand named Jett (Tim Gouran) lead her to coin ranching a "brutal and violent American ballet". (Leave it to Book-It to highlight Ferber's glistening dialogue so effectively.) But it's not so much a love-triangle, no matter what the 1956 movie version would have you believe. (That film, by the way, is perhaps the gayest Western in cinema history: Liz Taylor was Leslie, Rock Hudson sexed up the Bick character, and James Dean — in his final film role — played Jett.)

Jennifer Lee Taylor is simply magnificent in this current incarnation. If I dared you not to like her last year in my review of Book-It's Pride and Prejudice, I double-dare you now. She never falters as her Leslie Benedict carries us on this bright and bitter journey, and we feel that we experience the jubilance and desolation right along with her. Girlfriend has mad skills.

Speaking of, I must give a shout-out to the amazing Eddie Levi Lee, who was great earlier this year in The Chosen and who positively kicks ass — Southern accent and all — in the role of Uncle Bawley. And his real-life wife(!), Atlanta transplant V. Joy Lee, is a hoot as Luz Benedict, this week's second meddling, might-be-a-lesbian sister character. (See Constant Wife review below.)

Almost everyone in the cast is superb, as is the creative team: ever-skillful scenic design and lighting convey volumes with their simplicity. Add a multi-talented hottie of an onstage musician (Michael McQuilken) and Myra Platt's sure-fire direction to the mix, and you get the best piece of theater going right now in this town. To watch Book-It mess with Texas is to witness a giant thrill.

The Rep ends its regular season on a high note with this gorgeously-produced staging of W. Somerset Maugham's highly theatrical look at class and conscience in roaring 1920s London.

It's all about the witty and captivating Constance Middleton (Ellen Karas), a wealthy society frau who finds out that her cad of a husband John (Jonathan Fried) is foolin' around with her best friend Marie-Louise (fabulous Bhama Roget). What should Constance do? Neither the idea of accepting his infidelity nor throwing him out appeal to her, regardless of both options' supporting arguments from her ever-traditional momma (Bette Davis-esque Lori Larsen) and blunt-as-hell sister (deliciously high-sass Emily Ackerman). But it doesn't take long for Constance to find her solution: when an old flame (Mark Elliot Wilson) enters the picture, she soon discovers another more effective and entertaining way of preserving her dignity.

It all comes off pretty lightweight, really, and I never truly felt a bond with any of these high-falutin' (but superbly well-dressed) characters. I certainly can't blame the material's remoteness on the actors, though, because they are all pretty fantastic. Especially Karas, who holds it all together in her big, central, dialogue-heavy part; Ackerman as the meddling sis (my date Invisible Telle hissed a proclamation that "she's a bitter lesbian" during one of her catty tirades); and the absolutely smashing Roget, who I always look forward to seeing on stage and who is fast becoming the Parker Posey of Seattle. Also worth noting: the Deco-tinged set, which almost becomes a character itself and which is simply glorious to behold. (This may have been a hit-or-miss Rep season, but one consistency was the fabulous scenic design.)

"Decency died with dear Queen Victoria", says one character early in the play. Thank goodness Maugham's work has come back around to remind us.