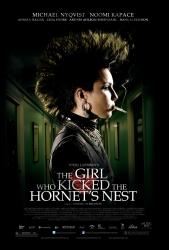 The Girl Who Kicked the Hornet's Nest

{The Girl Who Kicked the Hornet’s Nest opens in Seattle on Friday, October 29th, and is playing at The Harvard Exit}

” …but I’ve got a fuck off attitude. And that’s something that should be kept. In a…fucked up world”
– The Dead Milkmen – VFW

There are a lot of reasons people bond with the character of Lisbeth Salander of the Millenium (aka The Girl With the Dragon Tattoo) Trilogy. Maybe it’s her leet hacking skillz, cool photographic memory, or your sympathy for her being screwed over every which way from Sunday. But personally I think it’s her total “screw you” attitude (in the diminutive package) that makes the character work both on the page and on the big screen.

This film neatly closes off the series based on the books of the same name, giving Noomi Rapace as Salander plenty of screen time to bring the author’s image to life.  I probably enjoyed this film the most of the three, even though it did leave me somewhat befuddled regarding Swedish courtroom procedures.

There are only really two audiences for this film; those who’ve read the books (and enjoyed them enough to see the movie) and those coming in cold. Personally, I think those who haven’t read the books are going to get the greatest pleasure from this film (and the previous ones). For me knowing the path of the story is almost always going to diminish a mystery/thriller.

It’s probably a good idea to have seen the earlier two films (The Girl With the Dragon Tattoo and The Girl Who Played with Fire) – but I wouldn’t say it’s an absolute prerequisite.  I’ve read all the books and seen the prior two movies, but the friend I attended with had only seen the first film and didn’t seem to have suffered much for it.

The Girl Who Kicked the Hornet’s Nest provides some basic background during the opening scene, and a bit of exposition in the first portion of the film that will (mostly) get newbies up to speed.   Picking up moments after the conclusion of The Girl Who Played with Fire, our anti-heroine Lisbeth has just tracked down her father, the Soviet defector to Sweden Zalachenko (Georgi Staykov) and her half-brother Ronald Niedermann (Micke Spreitz), the evil giant who feels no pain.

She’s a bit pissed as he beat her mother until she was hospitalized for life, got her committed with the help of his Swedish security forces protector goons to a childhood in a mental institution, and then as an adult kinda had her framed for a few high visibility murders. I think most readers would agree that this is a fair distance from father of the year material – even taking into account any cultural differences that may exist in Sweden.

SPOILER ALERT: The climax of the earlier picture has her being shot in the head and then afterwards beating dad into submission, as her murderous brother makes his escape.  Lisbeth wakens in hospital after some surprisingly graphic brain surgery, just a few doors down from Zalachenko. Meanwhile…the super secret security forces that have been protecting Zalachenko begin to cook up their latest evil plan to protect their guy.  And for bonus points: endeavoring to send Lisbeth back to the institutional setting they’d wish she’d stayed stuck in forever. So, not likely to be a dull story.   Of course not to be left out is Mikael Blomkvist (Michael Nyqvist), the reporter hero of the series.  He as Lisbeth’s somewhat unlikely friend (and former lover) must attempt to rescue her.

Blomkvist enlists his sister to be Salander’s attorney in the upcoming trial and engages in the sort of journalistic cloak and dagger escapades to line up her courtroom victory that we’ve come to expect from the mind of the novel’s author Stieg Larsson.  This film, directed by Daniel Alfredson (who helmed the prior film but not the first of the series) largely shares the same visual style of The Girl With the Dragon Tattoo and The Girl Who Played With Fire – that sort of darkly shot-stylized-high-end-television-production-feel – for lack of a better description. From what I can tell, the entire cast of the earlier films are back for this one – so if you liked their earlier performances I suspect this one will work for you as well.

Personally, I probably liked this the best of the three.  Of course many viewers know how it’s going to end, but there’s still a lot of satisfaction in watching those moments where we’re rewarded for sitting through a lot of scenes of Lisbeth staring silently.  Typically when she’s displaying the barest hint of long-awaited pleasure as one of her tormentors meets an outcome (legal or otherwise) that jives with her personal sense of justice. Nyqvist and especially Rapace again do a good job reproducing the characters from Larsson’s books.

Weighted in the direction of a courtroom drama chess exercise moreso than the earlier films which have an action-oriented tilt, the picture builds tension the old fashioned way – with perceived menace and well chosen words. That’s not the say you don’t get to see Blomkvist wrestling with a Serbian hit man yielding a machine gun. It wouldn’t fully be the fantasy production for middle-aged journalists who dream of taking on their local version of the evil CIA without that. It’s just that the most satisfying moments aren’t necessarily physical ones in this film.

The melodrama from the earlier films is here as well – so if you’re going to get really torqued up over the director playing with your emotions through musical cuing you might want to stay away. Though for me this is a minor quibble about what’s generally an enjoyable last run with one of the more fun literary characters of the last few years, even if you’ve never met her before.

Note: The Girl Who Kicked the Hornet’s Nest is in Swedish and projected with English subtitles. If that’s going to bother you, there’s always the Hollywood version of all three coming down the pike. But if you’ve read the books, the tiny amount of words used here in comparison make me think you shouldn’t be scared away by a little reading.