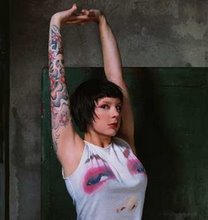 Goldfrapp and Miss Kittin and The Hacker

If there's one thing I learned at the movies, it was that the disco era is all about excess and wanting to have it all (and by it all, I presume, that means platform shoes and cocaine). I say this with authority because, even though I was less than 6 months old for "Disco Demolition Night", I've seen both 54 and Saturday Night Fever.

For a few weeks now, I was trying to figure out if it would be possible to see two of my favorite modern disco acts in the same night (last night): Goldfrapp at the Showbox Sodo and Miss Kittin and The Hacker at Neumo's. I had long ago committed to seeing Goldfrapp but wasnever 100% confident in that choice, with Goldfrapp calling the UK home and Miss Kittin residing in France visits to Seattle aren't exactly common. Goldfrapp's 2006 disco masterpiece Supernature but was more bearish on this year's Seventh Tree. It is gorgeous, lush and ethereal and Alison Goldfrapp has one of the most seductive voices in music these days but I, and this is my problem not Gold

frapp's, think they're the best dance/pop band around but just a pretty good trip hop group.

Live, however, the Goldfrapp show was dazzling at times. Alison's voice even sounded good within the confines of the Showbox Sodo. The crowd really responded well to the dance songs from Supernature like "Ooh La La", "Number 1" and "Lovely 2 C U" (which they closed with) and was attentive to the atmospheric ballads from Seventh Tree. They finished around 11:20 and I was bound for Neumo's immediately after, trying to get to Capitol Hill as fast as my 1992 Taurus was willing to take me.

I got into Neumo's around 11:35 and thought at first that the set was just beginning because I song was beginning with a slow, atmospheric build-up and was preceded by a big applause I heard while my ID was being checked. When I got inside, the floor was crowded but comfortable (and the balcony was closed) and people were dancing quite a bit to the booming electroclash beats (which they weren't really at the packed Goldfrapp show).

Miss Kittin's voice (and the music she makes with DJ/Producer The Hacker) is also quite sexy, but for a different reason: it is far more sexually overt but emotionally detached. It was a little difficult to hear her lyrics over the music but everyone seemed to really enjoy the set. She looked fantastic in a metalic, silver dress. Just as I was congratulating myself on making it in time to see both of the shows I was excited for, it was announced that their final song was up. They got called back for an encore just before midnight but a technical difficulty on stage precluded one. There was still a lot of sexual energy in the room.