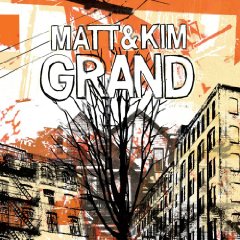 Matt & Kim are the two happiest rockers ever. It's scientific fact, proven by mixing multicolored test tubes while listening to their specific brand of Brooklyn dance pop. If you want to run this experiment yourself, witness their glee at a live show and try not to grin from ear to ear. Happiness will instantly overtake your uptight indie cred. Just relax, that's supposed to happen.

The band's schtick, intended or no, is to replace the pretension found in so much independent music with unbridled enthusiasm. Their stripped down sound just doesn't have space for anything else – Kim Schifino plays a basic drum kit with the manic energy of a five-year-old banging on pots and pans, while Matt Johnson pounds glorious sawtoothed synths out of a bare keyboard and . While their self-titled debut is ten tracks fueled by raw excitement and their live show is unfiltered energy, their new album, Grand, shows the band writing better, more complex songs.

Don't freak, Matt & Kim aren't going Prog. Grand expands the duo's sound while keeping everything uber-happy. "Daylight" is the easiest example. Little synth string flourishes and busy drum scratches give the track a deeper sound… it'd be cliche to say "Daylight" sounds more mature than previous cuts, but it's indicative of the deeper roots throughout the entire album. "Lessons Learned" provides another example, with Kim's wistful backing vocals displaying more intricate songwriting than the bouncy grin-rock the group are known for.

Not that those are gone, either. Songs like "Don't Slow Down" and the manic "Cinders" are as straightforward as they come, sticking with the band's tested formula of happy-dance music. "Cinders" in particular is the high energy mark for Grand. If it doesn't make you want to jump up and down with a sappy smile on your face, you're way too uptight for life. These straight up pop-punk songs somehow fit right in with the more reflective tracks, and that's what makes Grand a success. Everything fits.

The only thing missing from Grand is the elation and pure joy found in their live show, something every emo sadpants and uptight hipster should experience. Instead, Grand stands on its own as an album, all grown up. Listen to this during the everyday moments of your life, then go see Matt & Kim live when you're ready to get really happy.