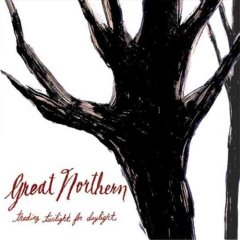 I can't give Trading Twilight for Daylight a pure, unbiased review, seeing how I listen to a lot of music that sounds a lot like Los-Angeles-based Great Northern. And after a while, if it doesn't reek of uniqueness, they all start to slush together in my mind.

Sure, Great Northern have moments which make them stick out from the rest of the pack – but for the most part, everything on this album has been done before in some degree. The band swings between subtle electro-folk tracks ("Our Bleeding Hearts") to songs that step a little too close to saccharine-pop sinkholes, a la the New Pornographers ("Home" and "The Middle"). This could be chalked up to the semi-conflicting, dual vocal duties of Solon Bixler and Rachel Stolte in some cases, and in others, simply to the monotony of the backing tracks.

Don’t get me wrong, Trading Twilight for Daylight isn’t a bad record at all. It's just inconsistent enough to allow it to fall victim to irrelevance. While it's good for a couple of spins, it doesn't have the power to make the listener revisit it again and again. However, the album does make a valiant attempt to exit on a high note, with the disc’s subtle closer "Babies." This track differs from its counterparts by carrying itself with an air of nonchalance. This song isn't trying to hard, it just develops in a simple, stripped down manner. And this is the manner in which most great songs achieve importance and staying-power.

If Great Northern would have released an album of songs all in the vein of "Babies," Trading Twilight for Daylight would have escaped the cold grips of mediocrity and been able to shine and stick. However, as is, this record, besides being good for a couple mixtape tracks, is best used for filling a gap in the living room CD case.