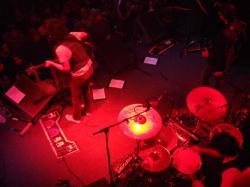 True story: shortly after I purchased a ticket to the Albert Hammond Jr. show, I got an e-mail from Tickets West saying:

"The tickets you purchased for Albert Hammond Jr. (of The Strokes) plus The Mooney Suzuki at Crocodile Cafe on 03/02/07 8:00 PM PST are refundable due to a change in the Attractions. Unless you specifically elect to receive a refund in advance, your tickets will be honored.

The original attractions: Albert Hammond Jr. (of The Strokes) with The Mooney Suzuki

The attractions are changed as follows: Albert Hammond Jr. (of The Strokes) plus The Mooney Suzuki."

How the show would have differed if it was Albert Hammond Jr. with the Mooney Suzuki, I can’t know for sure.

For the few days prior to the show, the metaphorical angel and devil perched atop my shoulder were playing an intense game of good cop/bad cop with my conscience. The question: whether or not the Strokes are the best “major” band in rock today. We actually reached some consensus that the answer is probably yes. While there are many bad reasons for dismissing them, there are few good ones. Sure, they are art school kids from New York, some of whom have significant trust funds. But the band is also deserving of many bonus points for taking exceptional opening acts on the road with them; the list of those coming through Seattle with the Strokes include Sloan, the Raveonettes, the Eagles of Death Metal, and Regina Spektor (who is my favorite artist of the moment and one my iPod is surely sick of by now). But when it comes down to it, the Strokes are probably the most technically proficient band of this generation – but unlike, say, Television (a great band of great musicians from a prior generation that the Strokes are often compared to), the Strokes’ catalogue is full of great songs to sing along to and sound great on the radio.

One of the members of the Strokes is guitarist Albert Hammond, Jr., who just completed a solo record that drops on March 6. He stopped by the Croc last Friday with his five-piece band for a packed all-ages show. Before I get into the bands, let it be said that while the Crocodile rarely puts on all ages shows, when they do them, they do them well. The band room was divided about evenly with a plastic fence, and a friendly and efficient security staff kept the drinkers and our under 21 brethren separate, instead of confining one group or the other to balconies or other cordoned-off areas far away from the stage. Both areas were pretty much full by the time the music began.

The first band was the Mooney Suzuki, a somewhat known garage rock band from New York. Their set was a fast-paced 50 minutes of almost non-stop rock and/or roll. Recalling a classic rock sound with a punk edge (imagine equal parts the Who and the New York Dolls), the Mooney Suzuki were thoroughly entertaining. I found their 2004 album Alive and Amplified to be one of the more disappointing albums of the past few years, as the songs did not translate well to Memorex and were often misogynistic – the most passé element of the rock star personae. It was produced by the Matrix, a songwriting/producing team mostly known for working with bubblegum artists like Avril Lavigne, but it wasn't a letdown because of that – it was in spite of the Matrix’s production.

Many of the songs played were from that album and from their most current LP, and they sounded much better from a stage than through headphones or speakers. The band brought a loud, enjoyable set that barely rested between songs. Singer Sammy James, Jr. might have thanked the crowd or mention that Albert Hammond, Jr. was up next, but he kept the chatter to a minimum. Less talk, more rock is what the Mooney Suzuki believes and practices.

About 40 minutes later, Albert Hammond, Jr. took the stage with his band (with three guitarists!) and his set was overall pretty good, but inconsistent. Playing songs from his forthcoming album Yours to Keep, it was obvious the crowd was only familiar with his work with the Strokes. At one point someone in the crowd asked when the next album is out and he said it was in four days, but I’m sure everyone knew he was asking when the next Strokes record was due. That included Hammond, who, after saying March 6 for his record, then said “in the summer.”

Playing for about 45 minutes, his set consisted of the ten songs from his solo album. Unfortunately, the songs that worked the best sounded like Diet Strokes (same great sound, zero calories). He should hardly be penalized for creating a solo record that doesn’t have the amazing rhythm section of Nikolai Fraiture and Fab Moretti, or that neither of his other guitarists complement him as well as Nick Valensi &#151; but there are already too many bands these days that sound like the Strokes. One more is hardly necessary – even if that band includes a member of the Strokes. It should also be noted that Strokes singer Julian Casablancas has sole songwriting credit for their albums. I now find that questionable, as tHammond’s songs do at times sound like Strokes songs. It gets further muddled, as Hammond’s voice doesn't differ significantly from Casablancas’.

Then Hammond played a handful of songs that he dubbed the acoustic set, and these songs hardly resembled The Strokes &#151; but that didn't make them better received. Upon walking toward the exit, an Imaginary Boyfriend told me to make sure my review included that Hammond was “ripping off Tom Petty” – which was absolutely true. The song he was referring to was “Blue Skies,” and it did have all of the elements we associate with why we either love or loathe Petty, featuring an acoustic guitar complemented with a ukulele and whiny, folky harmonies. Not every song must work, of course, but it was glaring that this one didn't. Conversely, the single “101” and “Call an Ambulance” are well-constructed pop songs that belong on the radio.

Yours to Keep, Hammond’s album is actually a pretty solid record and one of the better ones I’ve listened to early into 2007. But the Strokes still get played more in the rotation of my iPod.