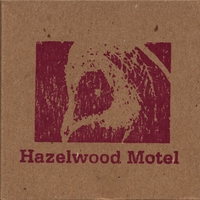 It is a fairly easy task to draw comparisons to the music on Hazelwood Motel’s self-titled debut, but it is a much more difficult task to place it within, amongst, or even around any specific style (which can be – and is in this case – a very good thing). It could, for instance, be described as Tom Waits two octaves higher, or perhaps Elliott Smith without the desperation of double vocals, or conceivably Cat Stevens minus the melodic jumps. Part of the problem, or achievement really, is that while nothing on this first effort is done with great energy, it is done with audible resolve and earnestness.

These twelve tracks, only four of which break the three-minute barrier, provide no proper consumption time, effectively hanging the listener out to be bumped along on a full emotional spectrum without ever coming to rest. It is the musical accompaniment to a torn, listing, wind-battered flag after a hurricane, posturing misery and inciting faith simultaneously. First-time listeners might be tempted to conclude that their sound is reined in or minimalist. Yet, there doesn’t seem to be any desire or longing here to shift gears into Pabst and power chords; they embrace with open arms the slow, short dirge, and it’s evident in their songwriting decisions.

The third track, “Break Myself In Two,” is the first indication that the band can grasp a pop hook, but it’s still only a level of liveliness that, say, M. Ward could be comfortable with. Strangely, the band admits that it is their most popular song. And, naturally, it only lasts two minutes and three seconds. Its immediate follower, “Envy,” continues to fill the mold of soft acoustic brushes and imploring falsettos, revealing that there is in fact more than one band member (Ed Vierda, Megan Pickerel, and Patrick Smail for those keeping score), as indicated by the very pleasant three-part chorus at the song’s conclusion. In comparison, the four minute and twenty second “My Demon” seems daunting, but a truly beautiful and subtle recurring vocal hook (“I know this feeling / You called out my demon“) compresses the song into what feels like three seconds of intense grief.

While the third track plays well with the crowd, the seventh and eleventh are the songwriters’ weapons of choice. And what painfully poignant tools they are! These truly are the gems of this debut (although the Travis-esque “Ruiner” just prior is pleasingly bouncy and light). Never has a chorus so startlingly austere and gorgeous as that on “Not Enough” been placed so faintly in the background, rather than drawn out. Yet the name of the game with Hazelwood Motel is restraint, and they succeed in driving the world’s pleasure delayers crazy here. By contrast, “Released” boasts the full band as lead singer, casting their waiflike lyrics over a Sufjan Stevens piano hook. It is blissful – right until the end, when what could be considered the song’s chorus repeats itself into the ether.

Debut albums are referred to by many characterizations, not the least of which are “promising” and “a sign of things to come.” But in the case of Hazelwood Motel, that “thing” has already arrived long ago. One gets the sense that the band is completely content with their musical choices, and that their sound is one that has been and always will be with them. This confidence bleeds right into their hearts and out of their fingers and mouths, spilling onto twelve quietly brazen tracks.